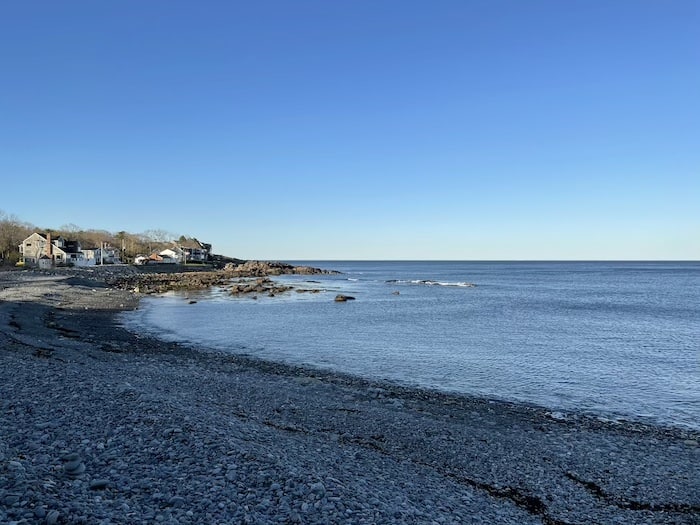 For six-and-a-half years, I’ve been working on my novel set in World War I. And this year, I finally carved out five days to sequester myself near the shore and focus on what is now the eighth round of revisions. Here’s the view a short walk from my little Maine cottage.

More next week. I hope you all are pursuing your dreams, too. It’s never too late . . . 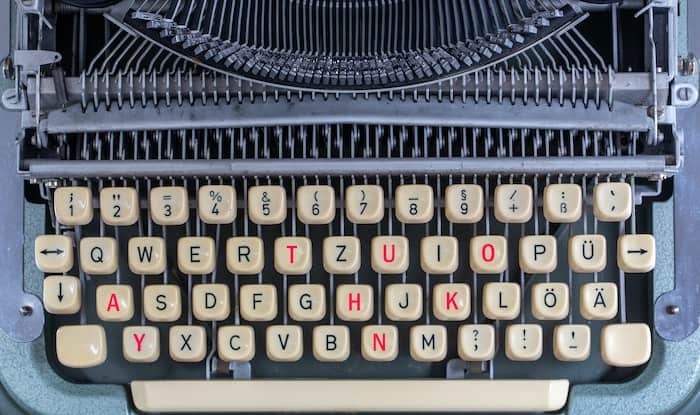 I updated my computer on Monday. That is to say, I transferred data from my six-year-old iMac to my new iMac, so that I could give my old iMac to Al, because my really old iMac that he was using for several years finally up and died. It was time for an upgrade, anyway, and so I made the business investment. I’ve favored Apple computers for more than a decade, now, not only because they’re so intuitive, but also because the keyboard is very easy on my hands. Any other computer keyboard feels like I’m banging on an old manual typewriter—that is to say, painful.

Things did not go smoothly. Following Apple’s instructions, I updated the operating system on my old iMac to the latest version before trying to transfer data between the two machines. But the new iMac, to my surprise and annoyance, did not have the latest OS version. So I had to first update the new iMac.

Issues arose, so I spoke with a very patient Apple tech support guy for at least an hour, trying to get the two machines to speak to each other. At last, the data transfer began successfully. Expecting it to complete overnight, I went upstairs to bed. Shortly after I woke up Monday morning, I checked progress. My old iMac had shut down 12 minutes before the multi-hour transfer process had completed. Back to Square One.

And so, I started the process all over again, with more Apple tech support. My biggest issue, other than tossing my entire morning out the window, was that I had to run a Zoom meeting at noon, and the estimated time for the data migration to complete was about five hours.

My only other option to run the meeting was my aging MacBook Air, which has not worked properly for at least a year because its memory is clogged up (hmmm, sounds familiar). So I asked the tech gal for help with that. She ended up handing me off to one of their senior tech gals, who spent another hour with me trying to free up memory. We never could figure out the basic issue, but I was able to meet my Zoom deadline.

I have to say that Apple support guys and gals are great. Knowledgeable, patient, and really try to help you solve the problems. A good thing, because the next issue arose when I tried to print from my now up-and-running new iMac, and my printer wouldn’t respond. Searching for info about the printer, whether it needed a new printer driver, etc., etc., only confused me more. So I called Apple support once again.

This time, after checking all the obvious stuff (so I thought), the tech support gal asked me if my printer was on the same wireless network as my iMac. Lo and behold, the WIFI had disconnected when I had unplugged the printer and plugged it back in, in the process of prior finagling with all the plugs and wires involved in the data transfer. I was able reconnect the printer to the WIFI and . . . it worked!

So, other than some more annoying app housecleaning, I am now writing on my new iMac with pleasure. And here comes the obvious conclusion: We’re so dependent on our computers. They are amazing tools when they work as intended. They are utterly frustrating when they don’t. If I’d been smarter, I would have set aside an entire day to make this transition, knowing that something would inevitably go wrong.

But these are problems that come with the privilege of being able to afford a top quality desktop computer—even as it’s essential to my work as a writer. I recognize this. I’m very grateful that I can do this. And I hope I won’t need to do it again for at least another six years. 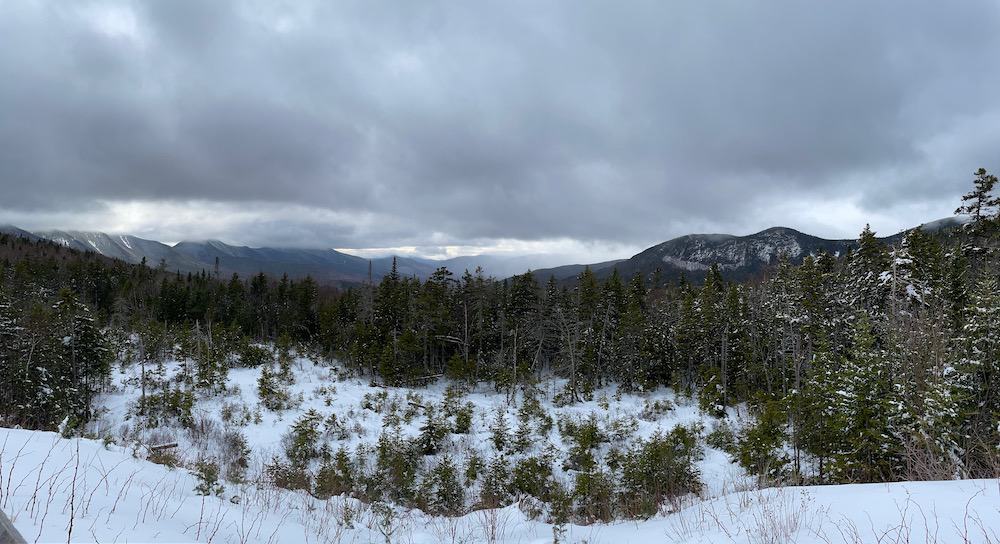 Sunday was my 67th birthday—or, as my eldest put it, the 33rd anniversary of my 34th. Sixty-seven doesn’t seem old anymore. While my body certainly doesn’t work as well as it once did, pre-scleroderma, and my memory is no longer as sharp, I don’t feel old. Wiser, I hope. Seasoned, certainly.

To celebrate that milestone, and the fact that both Al and I are now fully immunized against Covid (at least the original version), we spent the weekend in the White Mountains of New Hampshire. Decades ago, when we were first married, and later when our daughters were very young, we used to camp there for our summer vacation. I haven’t been back, since.

My inspiration for the trip was to see the stars from the Kancamangus Highway, which runs through the White Mountain National Forest. There are no interfering lights at night, and I can still recall the spectacular view from a visit more than 30 years ago. The weather, however, had other plans. It remained overcast throughout our trip, the sun finally breaking through on Sunday afternoon as we drove home.

But the day’s diffuse light cast its own spell, subtly revealing details otherwise missed. From Laconia’s lake shores to the Lincoln Trailhead in the White Mountain National Forest, from the Cog Rail part-way up Mount Washington to the Basin off the Franconia Notch Parkway, we immersed in rejuvenating beauty. As I reconciled myself to a birthday mountainside view shrouded in mist, the clouds suddenly lifted and we could see 80 miles. The perfect gift, and metaphor, after a long, long year. 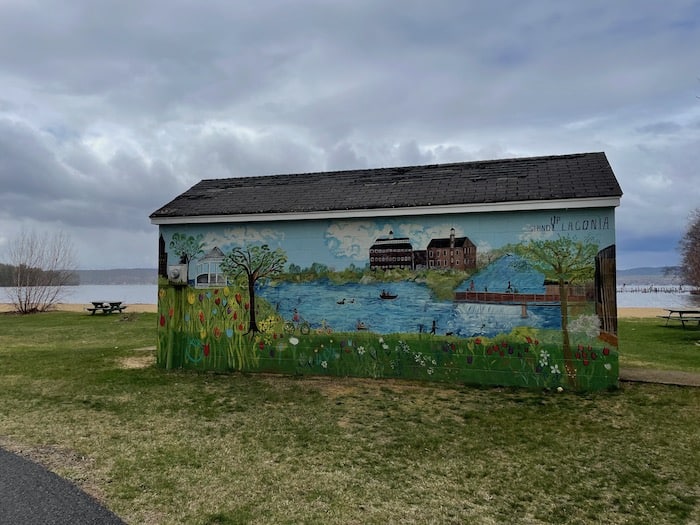 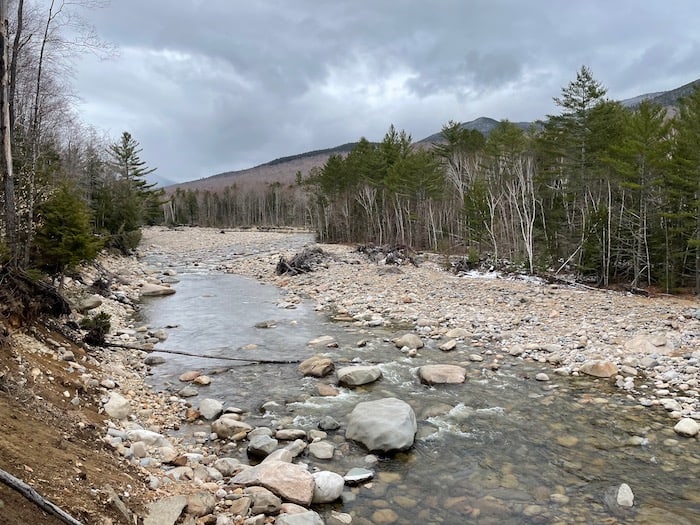 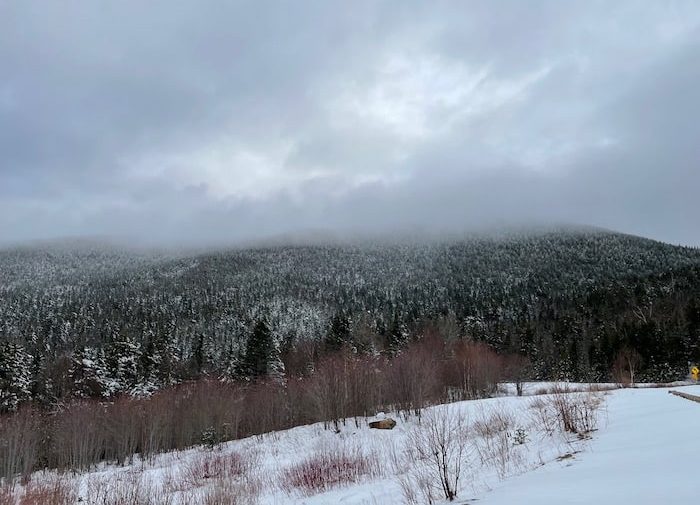 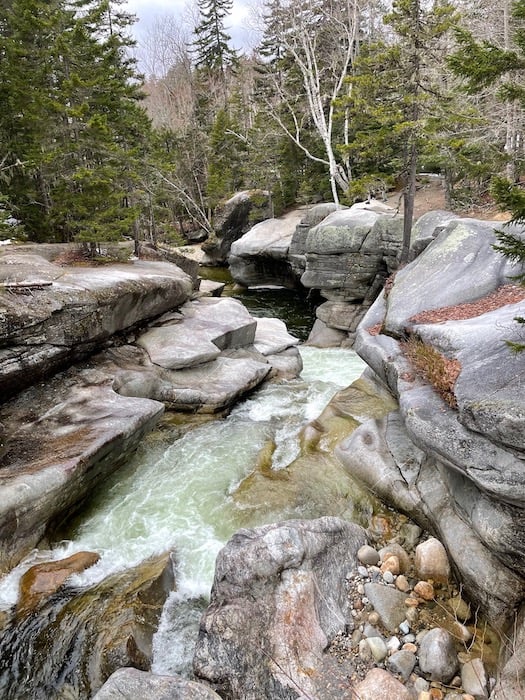 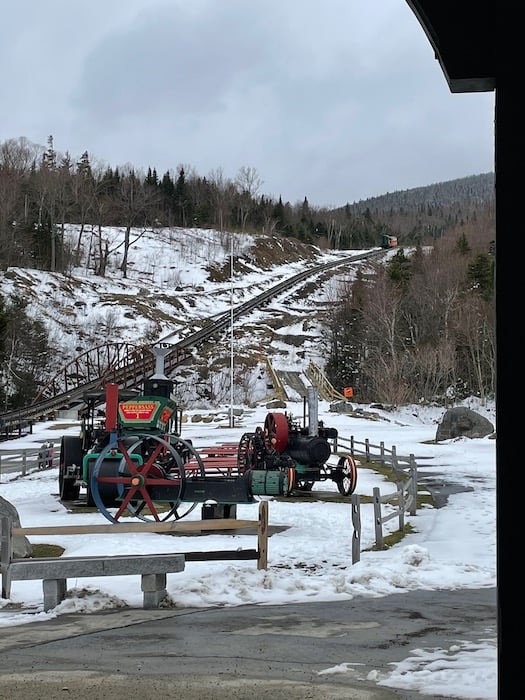 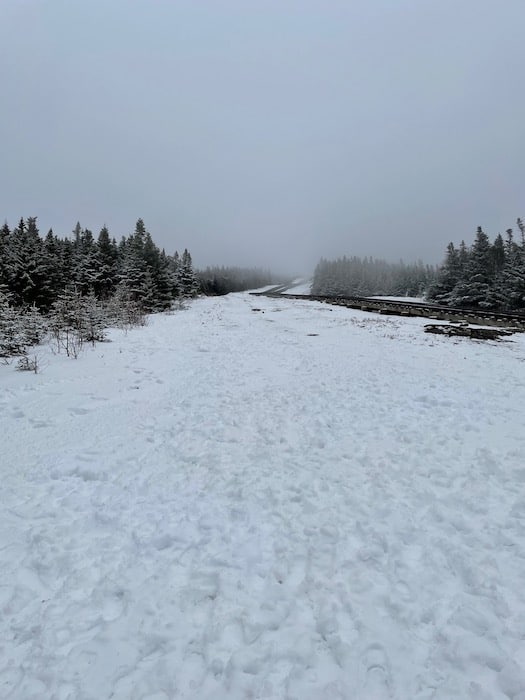 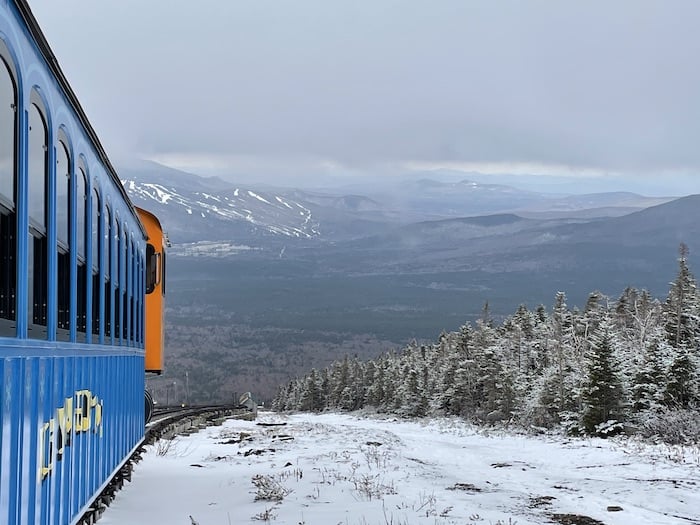 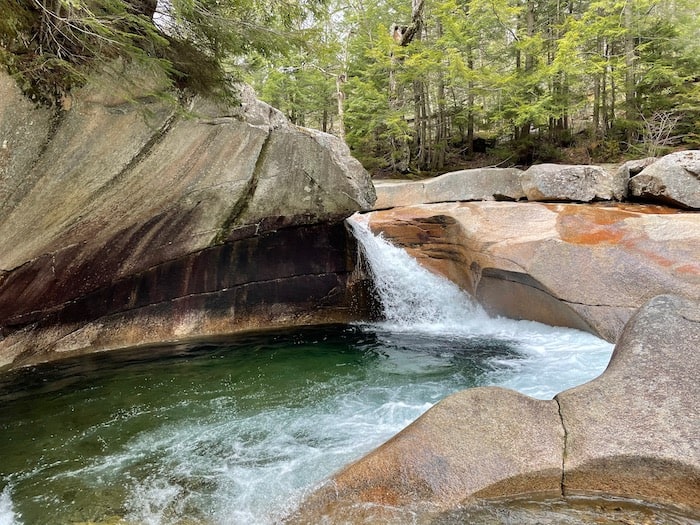 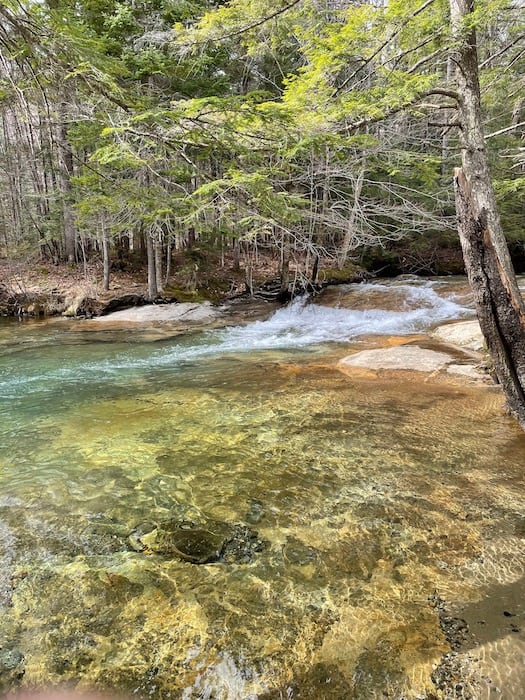 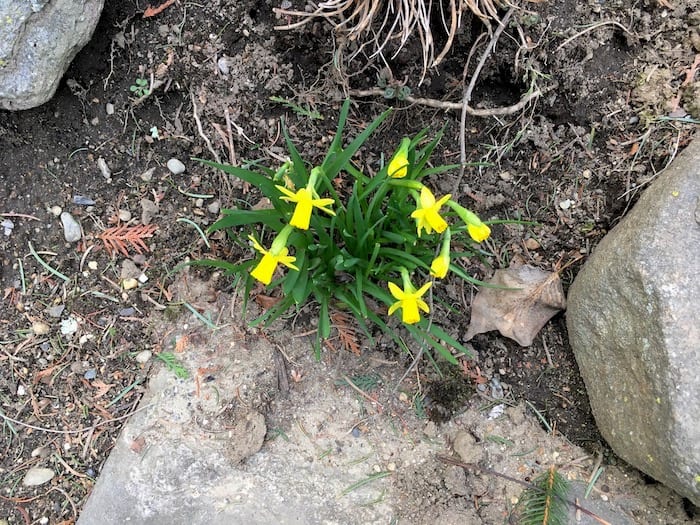 This past weekend, pastels proliferated. The temperature soared to mid 70s F, and Nature saluted with pink cherry blossoms and lemony forsythias, lavender violets and purple hyacinths. Within a few hours, nascent, chartreuse leaves unfurled to greet the sun. Glorious.

I’ve always loved spring in New England, when it finally arrives. Even as temperatures stutter for a few weeks in April, sometimes into May, the longer daylight hours and luminous garden palette lift my spirits. Watching the tree canopy expand each day never ceases to fascinate. Even the yellow pollen that will soon dust car windshields is a reminder of renewal.

All the more so as we emerge from Covid, step by cautious step. With vaccinations increasing every day here in the U.S., I’m beginning to feel my optimism reviving, too.

I got a real boost last Tuesday, the day I was fully immunized, when I finally got my hair cut again after a four month hiatus waiting to be vaccinated. It had definitely gone wild. Every morning, when I looked in the mirror, I was reminded of Albert Einstein. But given that my hair was longer than it’s been in decades, I decided to ask my stylist to shape it a bit fuller this time. After all, might as well make the most of it.

She did. I was so happy when I left the salon, I felt like a new woman. That mood carried me for the rest of the week and still lingers. Carpe diem. 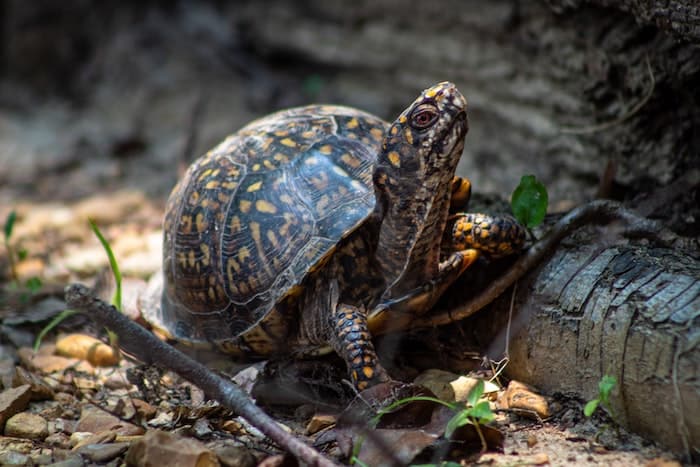 I had to take myself by the hand to get outside on Monday afternoon. Not because it wasn’t sunny, because it was. Or really too cold, because it was 57°F, though there was a brisk breeze. Or same-old-same-old, because there was plenty to see—daffodils, crocuses, even some hyacinths in bloom; the crimson and chartreuse hint of new foliage on street maples; our neighbor’s fairy garden, which changes themes every few weeks. This afternoon, it featured painted eggs encircled by multi-colored pebbles.

No, my resistance was mainly to the idea of just getting up out of my chair and stepping out of my nice, warm house. Even as I am officially two weeks past my second Moderna vaccination as of Tuesday midday, it’s hard to shake my Covid habits of seclusion.

On Sunday, Al and I took a hike at a local state park, and I realized that it had been weeks since we’d gone out in the woods together. It’s been too cold or I’ve been too tired or just not inspired. As I walked around our neighborhood on Monday, it suddenly struck me that this was the first winter in decades that I have not put snow tires on my car. I simply haven’t needed them, because I haven’t been driving much at all. Introvert that I am, I’ve managed just fine working at home, as I have for the past decade, Zooming only online, and otherwise slowing way down when it comes to socializing.

But now, with spring and vaccines and longer daylight once again, getting out seems more possible. We have a weekend getaway planned for my birthday soon. I’m starting to daydream about more extensive travel in the fall, when we know more about variants and how long the vaccines protect us.

At the same time, I find myself hesitating. I’ve been living in my turtle shell for so many months, even with sporadic, small outings to see my doctors in person, or for occasional errands or hikes, that the idea of actually going out daily, like I used to, seems a bit intimidating. Will it really be safe? Do I want to expend all that energy running around again?

Just as I had to acclimate to confinement, I now have to re-acclimate to getting out in public. It will take me some time and practice. And experience, poking out my head, discovering that I can actually stay healthy with more exposure to more people, that I can put up with masking for however long it takes, and that there is still much joy to be found in our troubled, troubled world.