Twenty-four years ago yesterday, I was sitting with my 91-year-old Grandma Elli on her upstairs front porch in Cincinnati, overlooking a tree full of ripe apples. It was the Shabbat before Rosh Hashanah, and we were talking about life. I didn’t know this would be the last time I’d see her before she would die that December of congestive heart failure. And I didn’t know that back in Massachusetts, a fair-haired baby girl with big blue eyes had just arrived, a baby who would transform our world.

Al and I had been trying to adopt an infant for nearly eight months. The previous April, a year-and-a-half earlier, we had proudly announced to our family around the Passover seder table that I was about six weeks pregnant. Within days I began to bleed and had a miscarriage. It took weeks to get over the loss, but I was determined to keep trying. 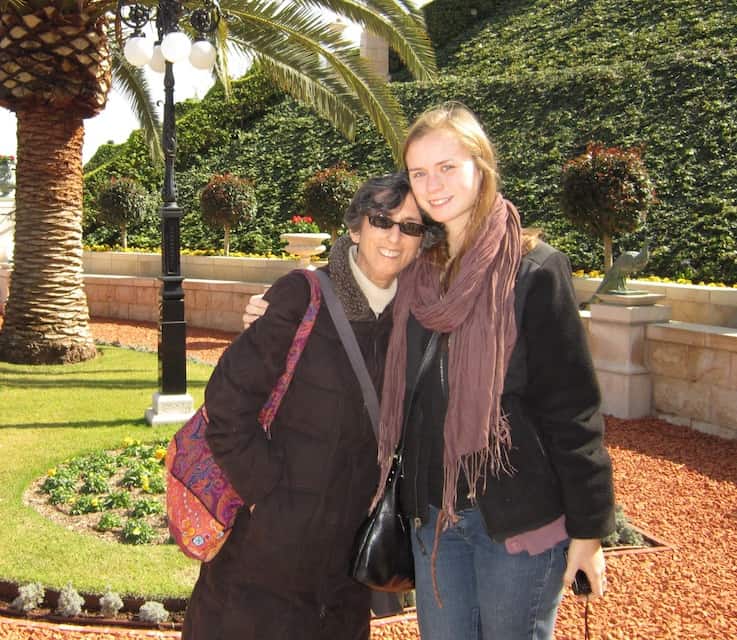 Over the summer, however, I began to experience a weird sensation in my wrists, like a rubber band stretching whenever I flexed. My rheumatologist called it a friction rub and told me we needed to stop trying to get pregnant. He was concerned that my scleroderma, suspected but not yet confirmed, was getting worse and that I was at risk of kidney failure in the third trimester. I trusted him, but I didn’t want to believe him.

We decided I should get a second opinion. I went to the University of Pittsburgh Medical Center to see a scleroderma expert. She was compassionate but forthright—I was on a dangerous trajectory with scleroderma and needed to go on medication that would cause birth defects if I got pregnant. I came home scared and distraught. But there was no other rational choice except to take the best shot at saving my health.

The High Holidays came and went. Al found me a fuzzy black puppy with a white star on her forehead and white sock paws. We named her Sukki, and she gave me comfort. But I was still depressed by the progress of my disease, which was crippling my hands and causing much fatigue.

One evening that winter, while I was lying on the living room couch, staring at the wallpaper, Al sat down next to me. We should try to adopt, he said. I wasn’t sure. I didn’t know what would be involved. How could we afford it? How would we find a baby? How long would it take? Would I be able to handle being a mother with my scleroderma? I felt like my body was failing me in so many ways, and I was terrified.

In my gut, though, I knew he was right. We began the adoption process shortly after, on Tu B’Shvat, the Jewish New Year of the Trees. Months passed with no leads. When Passover came around again, six months after I’d begun my prescribed course of D-penicillamine, I noticed that creases in my forehead had reappeared. I joked that I was the only 34-year-old woman in the world who was happy to have wrinkles.

Every night and every morning, I’d pray for a baby who needed us as much as we needed her or him. Summer came and went. After my return from Cincinnati, on the High Holidays, we both prayed with all our hearts for a child.

The day after Yom Kippur, a Thursday, I was getting supper ready when the phone rang. It was our social worker calling to tell us that he had found us a baby girl. As I hung up the phone with trembling hands, I heard Al’s car in the drive. I raced out in stocking feet to tell him the news.

The next four days were a blur of friends bringing over everything we could possibly need for our new baby. A crib materialized and a dresser, a changing box, clothing, toys, books, even a potty chair. Al and I took Sukki for a hike in the woods over the weekend and were so excited that we got lost, found our way to a road and hitched a ride from a kind passerby several miles back to our car.

Sixteen-days-old, Mindi arrived in a hand-knit pink sweater and bonnet that Monday, the first day of Sukkot—a festival of ancient harvests and lessons about God’s constancy in our transient existence. The pizza’s in the car, our social worker quipped as we answered the door.

And there she was, our beautiful, mysterious baby girl. We cuddled her and fed her, changed her diaper and laid her down for a nap in our friends’ borrowed white cradle. Al and I looked at each other as she slept and wondered, Is that all she does?

Little did we know.

Among the many things we have learned from Mindi over the years, perhaps the most important is this: Every child, however she becomes yours, is a human being in her own right, not a mini-Me. And this: Adoption is a challenging course. Along with the profound joy of creating a family, it brings the heartache of deep loss and an intense struggle for identity.

I have told Mindi that I am a much better parent because of her. She has forced me to stretch beyond experience, to question and discard pat answers to parenting. Always one step ahead of me, she has taught me to doubt snap judgment, take a step back and trust her to manage for herself.

Soon, she will be returning to her job and friends in Tel Aviv, with plans to come back to the States next fall for graduate school. On this anniversary of September 11, as the saber-rattling grows louder over Iran’s nuclear capacity, I’m trying not to worry. The world is a dangerous place, but we all have to let go of our adult children, ready or not, and believe in them and their ability to thrive on their own.

The Talmud teaches that parents must instruct their children how to swim. Bright, adventurous and resilient, Mindi is a strong swimmer. I’m grateful. I’m incredibly proud of her. And I’m going to miss her very much.