Hide Search
You are here: Home / Body / Another Year Older

I had a wonderful teacher in the first grade. Her name was Miss Kelly, and she had short, curly dark hair, a wide oval face and a big smile. She also seemed quite tall, although I wasn’t a reliable judge of height at that age. And she created fun class plays.

That year, we performed what would now be described as karaoke. Picture a group of six-year-olds singing and pantomiming on stage to musical hits, circa early Mad Men, and you get the idea. (“How come everyone is laughing?” I remember wondering during our performance.)

I haven’t thought of that first grade play in years, but for the past couple of days, one of our songs arose, unbidden, from the recesses of my gray matter and has been cycling through my head—Sixteen Tons, sung by Tennessee Ernie Ford.

You load sixteen tons, what do you get
Another day older and deeper in debt. . . .

It was my birthday on Saturday. Fortunately, the debt part isn’t what brought the song to mind. But another day older is how I felt, for better or worse.

“Are you excited for your birthday?” Mindi asked me a few days before.

“I don’t know. I guess so,” I replied. After turning 60 last year, 61 seems a bit anti-climactic. And there’s something about adding the 1 to the 60 that tipped the scales toward the “older” side of the equation.

When the day arrived, however, I was in a great mood. Something magical always happens to me on my birthday, a feeling that the day is different, special, blessed. The weather was perfect—70s, sunny, azure sky. Flowers that had been hiding for months suddenly dotted lawns up and down our street. On my walk back from Shabbat services at our synagogue, I noticed violets, always a spring favorite.

That evening, to celebrate my birthday, Al and I drove to a dinner concert in a small town in northern Worcester County, at a restaurant venue that draws class acts from around the country. The show did not disappoint: Michael Allman, son of Gregg, performed amazing R&B and Allman Brothers’ classics with Charles Neville of the Neville Brothers on tenor sax and Jeff Pitchell, an outstanding blues guitarist. I was transported back to my freshman year of college, when Sweet Melissa, Midnight Rider and Whipping Post blasted from stereos in every dorm.

Continuing my birthday weekend the next day, after brunch with friends, we drove an hour-and-a-half to the North Shore, to Crane Beach, beautifully maintained by the Trustees of Reservations, a great conservation organization here in Massachusetts. It was chilly, the water was a deep blue and the air, crisp. But I’d forgotten my hiking shoes in our haste to leave, I should have brought an even warmer coat than the one I had, and the latrines were—well, gross is an understatement.

So I was pretty cranky as we set out on our beach walk. I love the beach in any weather, but I couldn’t appreciate it, at first. After grousing to Al as we walked a ways, I plopped down on the sand while he explored closer to the water (he, of course, was quite comfortable walking barefoot while I was all bundled up and still chilly) and lay back to absorb some sunshine.

The break helped lighten my mood. Soon I was exploring patterns in the rocks and the soft shadows left by footprints in the sand. I took some pictures. Al strolled ahead to inspect what was beyond the next curve in the shoreline. We passed other spring beach-lovers, some in winter jackets and walking shoes, others in shorts and flip-flops. I drew my layers closer to ward off the stiff breeze and kept on walking. 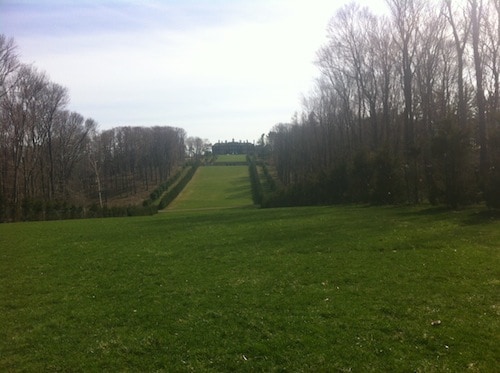 Al noticed a path leading up the side of the dunes, with a boardwalk. At first, I was hesitant to climb, but curiosity got the better of me, so up we went.

Well worth the effort, as the path led to a grassy expanse overlooking the ocean—blue and green and tinged with beige above sandbars—and a nearby island. When we turned around, we realized that this was the view at the bottom of a sweeping lawn that extended from the hilltop Crane Estate, part of the Trustees of Reservations property.

As we hiked back down to the shore, I began to feel a bit tired. The wind was still stiff, and we had to walk into the breeze all the way back. By the time we finally reached the boardwalks leading to the parking lot, I was really dragging. We made a brief stop at an antiques store (overpriced) on our drive through a nearby town, then found a local restaurant a few blocks away for dinner.

Waiting for our meal, I was quite weary. “Are you okay?” Al asked. “I think so,” I said, though I wasn’t really sure. I was worried. Here we had just walked the beach for a few hours, and I was totally spent. We’re planning a trip to Europe this summer, with an aggressive travel itinerary, and all I could think of was—how am I going to keep up with what I want to see and do?

The meal revived me, though I could only drive half the distance home, and had to trade off with Al after we got on the Mass Pike. “I’m feeling my age,” I told him.

It wasn’t until later that night, after I had showered and gotten ready for bed, that a light bulb went off in my head: It’s hard to walk in sand. It takes a lot of extra energy, especially when you’re wearing the wrong shoes. And it was cold out, and it’s even more tiring for me to walk into a chilly headwind. Yes. Indeed.

So I stopped catastrophizing about our trip, at least for now. I do have to pace myself when I’m physically active. That’s the bottom line. But I can do it. I have to believe that.

In our first grade class play, the one other song I remember singing was I Whistle a Happy Tune from The King and I. We each had a partner, and we took turns singing and trying to whistle along to the music. I’m sure we looked adorably hilarious for all the parents in the audience, but I took it all quite seriously, as only a six-year-old can: