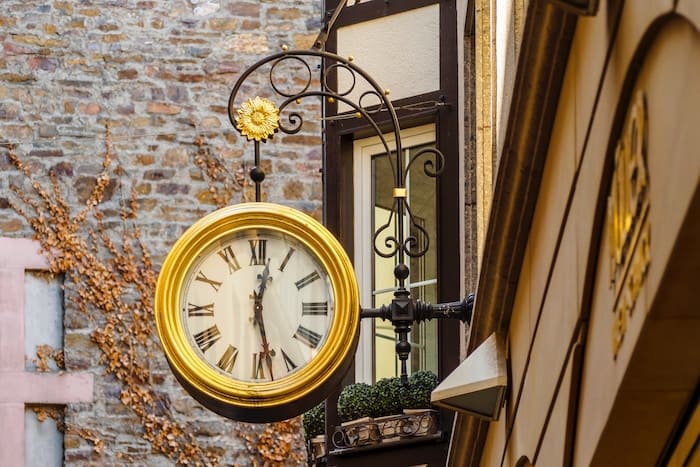 A week ago Monday, I was on my way home from a two-day philanthropy board meeting in New Jersey, and I had a plan. My German language class meets in Boston on Monday nights, and I didn’t want to miss it, so I had booked roundtrip flights (plus carbon offsets) from Boston to Newark far enough in advance to get a good price (usually, when we meet, I drive to New Haven and take the train). My afternoon flight back to Boston was due in around 3:30, giving me plenty of time to retrieve my car from long-term parking, drive into the city and park, then get some dinner and be at class for 6:15.

As I said, I had a plan. Air traffic in Boston, however, was in no mood to cooperate. Despite good weather, our flight was delayed in Newark by about an hour due to a busy day at Logan. Still, I figured when we landed after 4:00, I had plenty of time to get dinner. The van to the parking lot arrived right away . . . but as soon as we left the airport, we got stuck in traffic. Why? Because the Chelsea drawbridge was open. Maybe twenty minutes passed until we finally got up to the bridge and . . . the gates went down and the bridge began to rise again because another ship was sailing through. Our driver turned around and drove the back route to the lot, earning a round of applause from all of us passengers. Still, this jaunt had now taken as long as my flight.

I got to my car, it turned on (thankfully), and I started to navigate my way into Boston in what was now high rush hour traffic, but WAZE was not really clear on where to turn, so it took a bit of intuition to find my way downtown. By now it was about 5:45, still enough time to park, grab some takeout, and get to class.

However . . . when I finally reached the garage where I’d reserved a space, the entrance was blocked (are you kidding me?) due to construction. A sign said to take three left turns to get to the alternate entrance, but I was pretty frazzled and hungry at this point, it was drizzling and getting dark, one way streets in Boston can be confusing, and I couldn’t find the other entrance, so I ended up parking on the street.

Usually, street parking in Boston uses an app. Not this space. It required putting a credit card in a meter. I tried dipping my card three times, with my fingers getting numb from the cold, but couldn’t grasp the card and retrieve it fast enough. Aargh!!! I stopped a trustworthy-looking young man who was walking by and asked if he could help, which he did, and I was able to pay.

Now it was after 6:00. And I was disoriented. How do I get to class from here? Trying to figure it out from Google Maps took a few false starts, but ultimately, I found the building, got through the reception desk security and up the elevator to our meeting place at WeWorks, which is shared office space. Our class meets in one of the conference rooms, but you need a key to get in (which our instructor has). And, as I scanned the lounge, no classmates were to be found, which meant they’d already gone to the room.

As I was looking to see if I’d missed someone, I took a step . . . and tripped over a stuffed ottoman near a couch. Wham! I landed on hands and especially on my right knee. It hurt. A lot. A fellow sitting nearby asked if I was okay (“No!” I cried) and helped me up. I could still walk, fortunately, and a woman who was cleaning the kitchen area let me into the locked section of the office space. She also, at my request, kindly filled a bag of ice, which I used to reduce swelling in my knee for the next couple of hours.

No way I was going to skip class after overcoming all those obstacles! But I did leave an hour early, because I was quite hungry, tired, and still had an hour’s drive home. Al met me with a big hug and bowl of warm soup, which was exactly what I needed.

A week later, my right knee remains a bit black-and-blue and is not quite back to normal. If I continue having issues later this week, I’ll go for an X-ray to be sure I didn’t do anything other than sprain it. The rest of my fall-related aches and pains have resolved. Most importantly, I did not hurt my hands. This is the real miracle of the whole episode.

The older I get, the more the idea of falling scares me. If I can find any silver lining in this escapade, it’s the fact that my hands are unharmed, and I don’t seem to have broken anything. I didn’t give up and still attended most of the class. It was an important reminder to be mindful of where I’m stepping. And my husband gives the best hugs in the world.