Hide Search
You are here: Home / Body / Blast from the Past 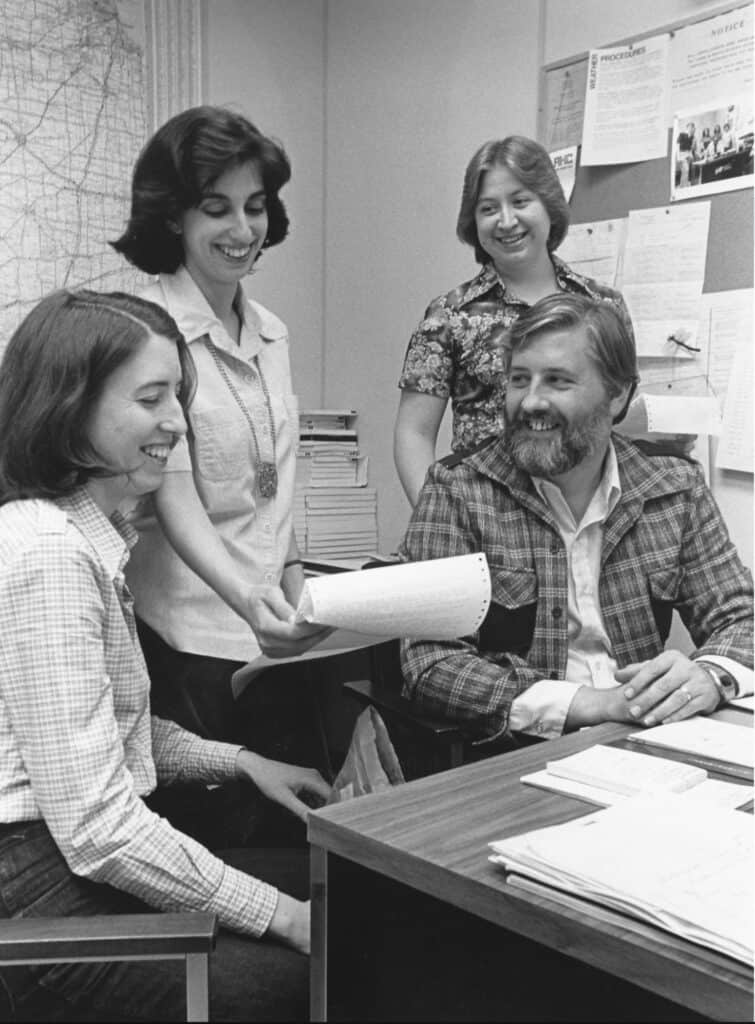 Last week, a longtime friend sent me this photo. That’s me, with the dark hair, standing. The year is 1980, I’m 26 years old, a graduate journalism student at what is now the University of Illinois Springfield.

My friend is seated to the left, and our third classmate is to the rear. The guy with the beard and plaid 70s jacket was our news director at WSSR-FM (now WUIS-FM), the Springfield NPR affiliate.

My first reaction to seeing this on my social media feed was laughter. Were we ever that young? Did I ever have that much hair? No glasses, either—that was back in the day when I wore contacts.

Lots of nostalgic memories of covering the Illinois Statehouse during the 1979-80 legislative session, including the infamous June 1980 defeat of the Equal Rights Amendment, which effectively killed it nationwide (until now, when ratification efforts have been revived). I covered the ERA debate for NPR as a stringer, even interviewed ERA foe Phyllis Schlafly once on the phone, a master of the 20-second partisan soundbite. (If you watched Mrs. America on Amazon Prime recently, you’ll know whom I’m talking about.)

As I studied the photo, I zoomed in on my hands. I have very few images of my adult hands before scleroderma. I had forgotten how long my fingers were. As I thought about this some more, I realized this picture was taken the year before I developed the first symptoms—in my case, swollen fingers and migrating arthralgia (as in, pain in a knee, then a few hours later, pain in a shoulder, on and on). I’d had Raynaud’s for years, but only thought of it as a nuisance.

It’s one thing to see a nostalgic picture of your younger self, quite another to see yourself caught in amber, before everything changed.

Yes, I do miss my young hands. But I can no longer remember what they felt like. And I’m not sad. In fact, you couldn’t pay me enough to go back to being 26 years old in that life, at that time. The year after that photo was taken, I moved to Massachusetts, my first marriage broke up, I lost my new job as News Director at our local NPR affiliate due to Reagan-era budget cuts, and I was stressed, to say the least. I believe it is no coincidence that I began to experience strange auto-immune symptoms, even as I had no clue what they were. Though there are no definitive studies that prove a causal relationship between stress and autoimmune disease, there is some pretty interesting evidence that such a connection is likely. From my own experience, I can certainly report that constant triggering of my fight-or-flight adrenaline response when confronted with all of those changes and losses at once did not do my health any good.

Forty years later, I have compassion for that younger me. She did not know what she was in for, but she discovered a deep reserve of grit that she never knew was there until she needed it. None of us ever knows, beyond the moment we live in right now, what is next. As we all find ourselves in our current heightened state of angst and unknowing, only one thing is certain—we’ll find out when we get there. May we all learn how to make the best of it, better than we could have ever anticipated.