Hide Search
You are here: Home / Body / Come Sail Away

Last Tuesday, I was living on a boat. A sailing yacht, to be specific, harbored in a marina in Oakland, California. We were on the West Coast this past Memorial Day weekend for my niece’s wedding, and Al and I had extended our stay by a few days to do some touring.

We found the boat through Air B&B, which has become my favorite resource for traveling. Forget hotels. You can find some really special places, save money and meet really interesting people. 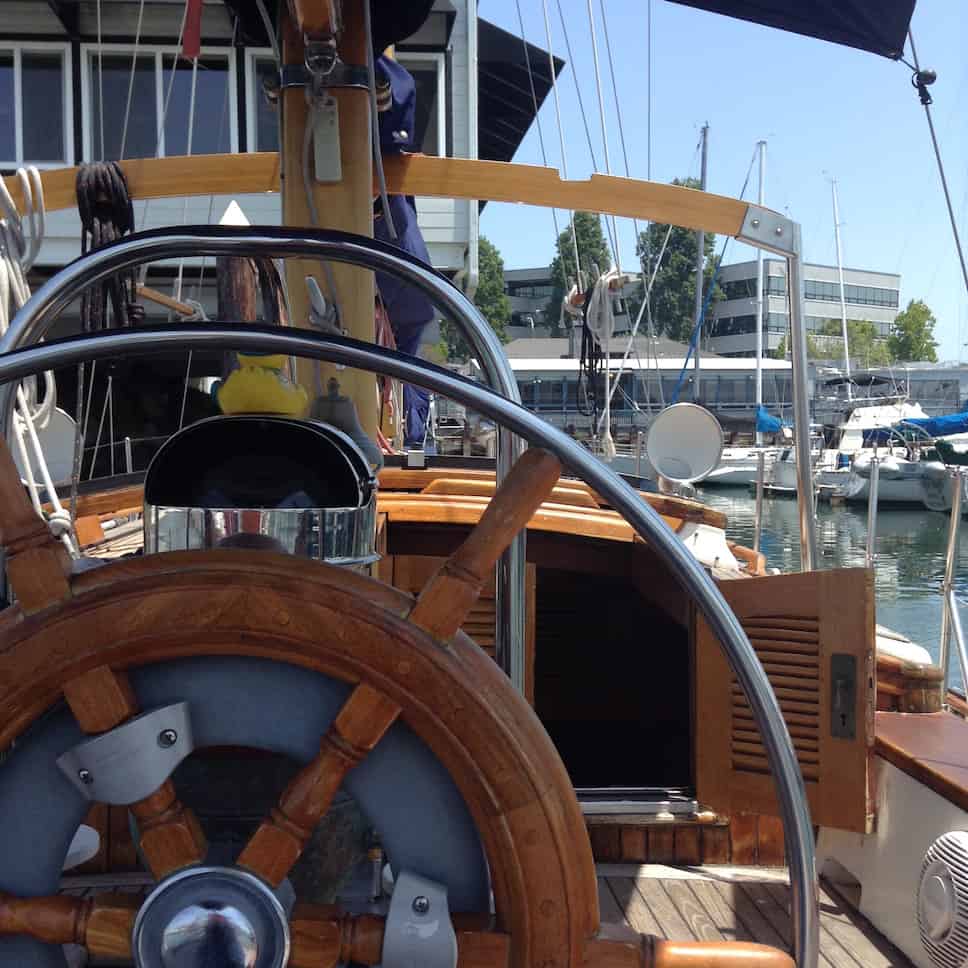 For the first three days of our trip, we stayed in a lovely apartment in Oakland, not far from Jack London Square, a convenient BART stop and the ferry to San Francisco. That was a perfect location for getting to the wonderful wedding, which took place amidst a cathedral-like grove of redwoods at the UC Berkley Botanical Garden, Saturday night.

The next day, Al and I moved on to the sailboat, which had been lovingly restored by our host. A British expat, he had lived all around the world, ended up in Oakland by a series of events that started with not being able to bring a puppy back to England without quarantining his pet for six months, and eventually bought the boat from another sailor who had intended to take it on a worldwide journey, but had given up his dream when his marriage fell apart.

Our host showed us the before and after pictures—from a nicotine-stained, trash-filled (literally—tons of trash) hulk, he had transformed it to its current pristine state. The living quarters (I’m sure there’s a sailing term for it that I don’t know) are finished with teak. The sails are made of classic, brick-colored canvas.

The marina was very calm, and our floating home rocked gently. Al never noticed it, though I continued to feel the boat’s movement even when we were on dry land. But it didn’t bother me (contrary to my experience with whale watching back in April).

What struck me most about the boat, however, was how it forces you to be mindful—of space, of water use, of storage. Close quarters required me to step carefully. Once I learned the ship’s contours (and banged my shin a couple of times), I could get around and up and down the ladder to the deck quite easily.

I figured out all the wooden latches for the closets and the trick to opening the bureau drawers (all this was built into the walls), which, to my amazement, did not fight my fingers. I even learned how to take a hand-held shower in the little bathroom. And all three nights, we slept soundly in the cozy bed built into the cabin at the boat’s bow.

But the best part of our stay was the morning we chartered our floating home for a sail around the Bay with our host and a mate. Our host is a very experienced sailor, as well as a great conversationalist, and he was more than happy to answer all of my questions about the art of sailing, in-between raising and lowering the sails, tacking, coming about, and skillfully avoiding other boats whose pilots knew less about rules of the waterways.

As we neared the island of Alcatraz, the wind was stiff and the water quite choppy. But even as we got splashed, sailing at nearly a 45 degree angle, it was a treat. There is something magical about being powered only by the wind, gliding past a sea lion bobbing in the water as pelicans sail overhead.

Our host let us off at one of the piers along San Francisco’s waterfront, and we went on our way, exploring the city. When we returned to our sailboat later that evening, I felt like I was coming home to an old friend.

We were sorry to leave. The one consolation was our plan for July, when we venture to Italy for the first time. No boats for lodgings, but so long as we both stay healthy enough to travel, we’re ready for more adventures. Once the travel bug bites, there’s no turning back.