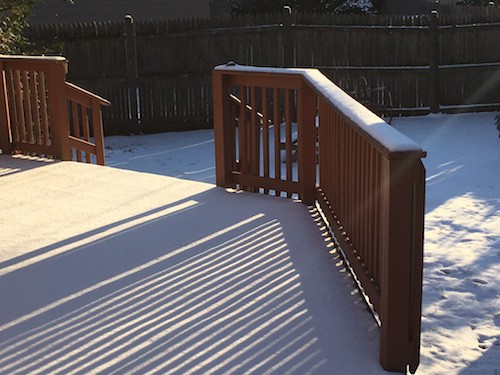 It’s always a surprise, that first coating of white. This year, it arrived on Monday, just an inch, already melting by mid-afternoon. But the flakes fell softly in the morning, fat, puffy, like thousands of tiny parachutes drifting earthward. Clinging to evergreens, disguising flaws, the snow absorbed sounds as it fell, hushing the world, slowing all down.

Mid-morning, as snow continued to fall outside my window, I was on a video conference call with people in New York City (rain), the Catskills (snow) and the Netherlands (almost never snow). The two young daughters of the Dutch woman overheard us discussing the weather and asked to see. My client in the Catskills turned his computer around to give them a peek of his blanketed yard. Their eyes widened with amazement.

By early afternoon, I had to go to the post office to mail some packages. Should I wear boots? I tried to slip on my rain boots but had to pull them off again. A few weeks ago, I kicked myself in the inner left ankle, one of those slips of coordination that occasionally plague my stride. This has morphed into an ulcer, then a rash from bandage adhesive. I saw my podiatrist last week, who prescribed steroid ointment and compression socks, and explained how weakened veins in my ankles are exacerbating the healing process. Which is why I couldn’t wear the boots. I opted for walking shoes with good treads. I’m hoping the ankle will improve by the time the serious snow falls.

Two o’clock, when I returned home, the sun was shining, the snow compacting as it melted. My footprints revealed slate. I shed shoes for slippers, ate some soup, forbade myself from reading any more news and got back to work. I didn’t notice the sun setting and the darkness settling in.

Winter is coming, and cold, and ulcers, and more snow than I want to contend with. The days grow shorter and darker. Headlines weigh on my heart. But halfway around the world, two little girls giggled at the novelty of a world transformed by white. I did the same when I looked out my window Monday morning. Let there be Wonder.