Ginger is getting old. She turned 14 about a month ago, which means she’s 98 in dog years—or people years, I can never keep it straight, seeing as she’s lived 14 years as a dog but is the equivalent of a centenarian.

She’s been with us since she was two, a skinny, flea-bitten dog that Al rescued from owners who sold her for the price of their overdue electric bill. From the day he surprised our girls after school, waiting with her to walk them home, Ginger has been our beloved companion—silly, rambunctious, cuddly, trusting, faithful—the Golden Retriever Mindi had begged us for, for years after our other dog died. 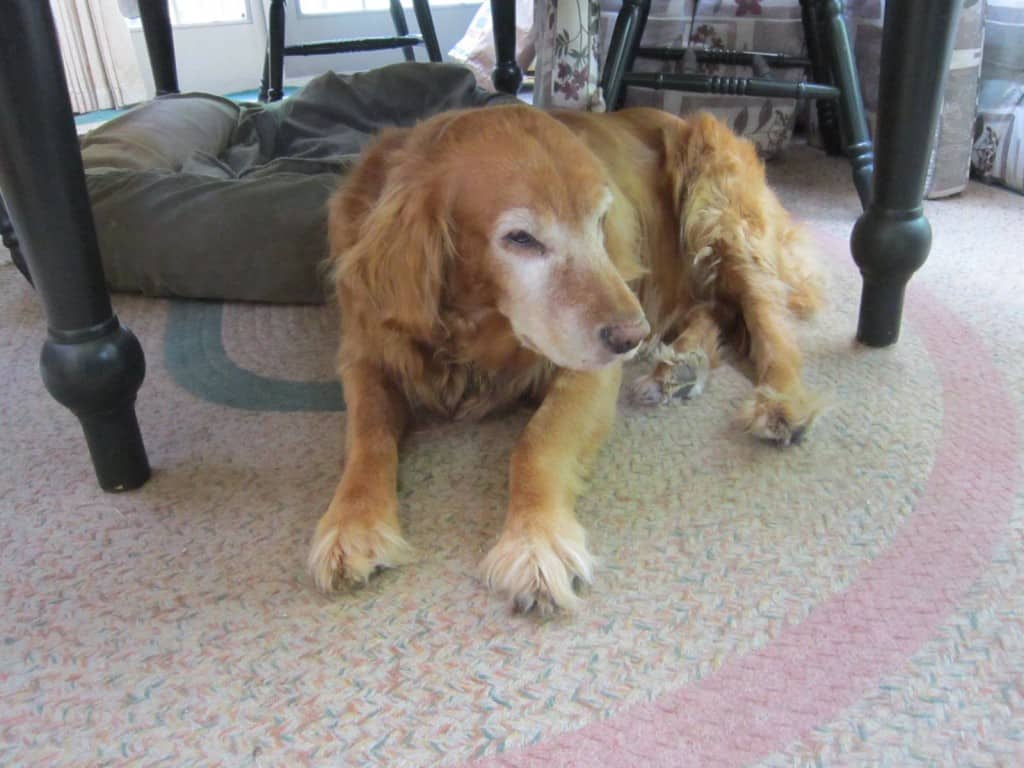 My constant companion who hangs out under my desk while I write and follows me all over the house, often positioning herself where I’ll trip over her if I’m not careful, she’s doing really well for a Golden. Our vets are always impressed and tell me she’s way out on the tail of the big dog survivor bell curve, still friendly as a puppy and a total love bug, even as she’s white in the face and struggling with arthritis.

But it’s hard to watch her age, especially as she has more trouble getting around. She often trips over her front paws when I walk her, because, as the vet explained, she has less range of motion in her hips and has shifted weight-bearing onto her front legs. And she can’t climb stairs—or, at least, she’s afraid to—which we learned recently when she made her way down into the basement family room twice in one week and had to be carried back up both times. (We’ve since blocked the door.)

So, here we are, both with our ailments. But unlike me, she has no way of understanding what’s happening to her body, and she’s completely dependent on us to help her.

We’ve tried a few different arthritis medications. The first irritated her stomach so much she stopped eating after a week, and the second made her throw up after two days. Now we’re in day five of trying that same med plus an antacid pill twice a day, and so far, so good.

My challenge has been trying to figure out how to get the medicine into her. The first option was a chewable tablet, so that seemed like the perfect solution until she stopped eating. Her current medication is a liquid, which I’ve been mixing into low fat ricotta cheese—for Ginger, a huge treat.

The problem has been the antacid pills. I can’t open her jaws with my fingers. I can’t hold the pill. Al leaves too early in the morning to give it to her, because Ginger, grand old lady that she is, doesn’t rouse until after 9 o’clock most days. Our former dog would snap at pills. So, for a few weeks after Ginger threw up, even after I discussed the problem with our vet and he suggested the antacids, I procrastinated. I just stopped giving her meds. I was afraid to try.

But then I took her for a walk last week and she was tripping so much I decided I really had to get over myself and figure this out. A smidge of butter on the pill, delivered on a teaspoon, did the trick. After only a few days, Ginger now perks up her ears when it’s pill time, trots over to the fridge while I prepare the spoon and swallows her pill patiently. She’ll even allow a second try if I miss my aim and the pill falls off the spoon. A good thing, because my hands won’t cooperate easily.

Ginger’s big treat, also part of the mix to be sure her stomach doesn’t get irritated, is a piece of challah after she’s taken all her meds. This is her favorite food in the whole world. She grabs it from her bowl and runs under the kitchen table to eat in her bed.

Yesterday when we walked, she was perkier, sniffing every leaf and blade of grass, curious, not lagging behind me as much when we went up a slight hill on the way back home. She got up from her bed with less trouble this morning and took a leisurely downward-dog stretch. She’s eating normally. So I have my fingers crossed.

Tonight Mindi comes home from a year in Israel. She’ll be with us for a month, then going back to Tel Aviv for another year. She’s asked after Ginger often when we’ve Skyped, and we’ve tried to get Ginger on screen for a woof or tail wag, but without much success. I’ve had my worries this year, watching her age more rapidly, if she’d hold on until Mindi’s return. She has, and so have we. And I’m grateful, very grateful.