When you live in a home long enough, stuff breaks. A doorknob loosens, a faucet drips, a burner element wears out on the stove, a toilet leaks, a chair leg cracks, a lock fails. The list is endless. 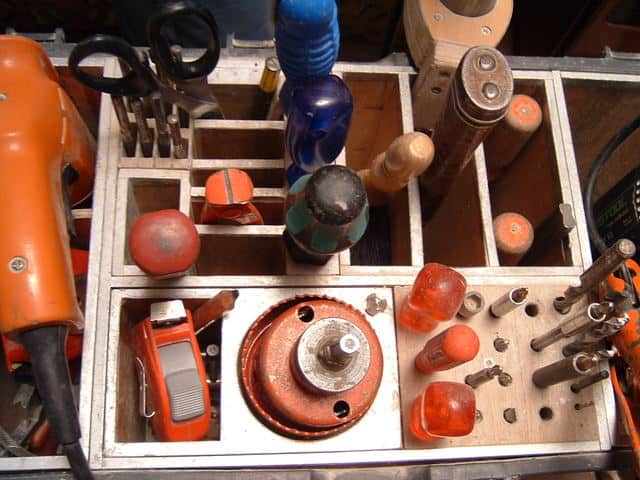 If you’re handy, fixing stuff around the house can be a satisfying hobby. If you’re not, it’s a cumulative nuisance. And if you can figure out how to fix it but your hands won’t cooperate, it’s truly irritating.

I used to have extraordinary fine motor coordination in my hands and could do just about any kind of detailed manipulations. I watched my father fix all kinds of objects around the house and build bookcases to hold thousands of tomes, and I imagined being able to do the same someday. But now that I have my own home, I can’t do the kinds of repairs that I wish I could because my hands simply won’t cooperate. Al, by his own admission, is not Mr. Fix-It.

So it was with great satisfaction that we finally found a handyman who can do just about any repair for a reasonable price. Our list has been growing for a long time, but the problem that finally drove us to seek him out was the ladder to the attic, which broke about a year ago, making it impossible to access our luggage. We are planning more travel in a few weeks, this time to Italy, and we needed to get up there.

And so, over the past few days, Marc has been fixing stuff: He replaced the ladder, fixed the impossible leaking toilet, repaired the drippy kitchen faucet and spray hose, reattached the spring on the outer front door that fell off the other day, wired a new front light, replaced some shakes that had been bored through by woodpeckers, and mended two broken chairs and the leg on our coffee table.

As these things go, nothing was as simple as it seemed. Bees were investigating the holes bored by the woodpeckers. The toilet needed several adjustments, as did the kitchen faucet. The attic ladder was a challenge because the original door had been built in the wrong place relative to the upstairs hallway and staircase. But Marc figured it out, spicing his efforts with some colorful language that reminded me of my dad’s cursing when things didn’t go right, and demonstrated an admirable ability to sort through the challenges and solve each one.

While he was working here on Monday, I was faced with a different kind of fix-it problem—trying to get the scanner on my printer to work again. I had an important document to scan, and the printer would create the image, but continually refused to save the file. I tried reinstalling the driver twice, only to have the same result. I groused to Marc, who cracked a sympathetic joke.

I was ready to give up and take the document to an office service store, when I took a break for a late lunch. Marc was up in the attic, adjusting the length of the new aluminum ladder after a particularly difficult battle with the old wooden one, which had twisted and tangled in its ancient spring. If he could persist and figure it out, so could I.

So I read through old printer documentation, tried a different way of getting into the scanner software, and—lo and behold, found the problem—a save option that had not been activated. The scanner worked. “I did it!” I shouted to Marc. He cheered.

I may not be able to do what Marc does with fixing stuff with my hands, but I sure learned a good lesson about persistent problem-solving. When he left Monday afternoon, he told me to start making “another little list.” I already have a few items noted down for after we get back.