Hide Search
You are here: Home / Body / It’s Not Over ’til It’s Over

I don’t know about you, but I’m exhausted from watching the World Series. And even with the Red Sox now leading three games to two, the outcome is still anyone’s guess. With the exception of the Game 1 rout of the Cardinals at Fenway—a misleading, far-too-easy, albeit satisfying start for us Red Sox fans—each ensuing game has been a nail-biter through the bottom of the ninth. Even though most games have ended around midnight here on the East Coast, I’ve had to stay up and read a bit before falling asleep. Too much adrenaline. 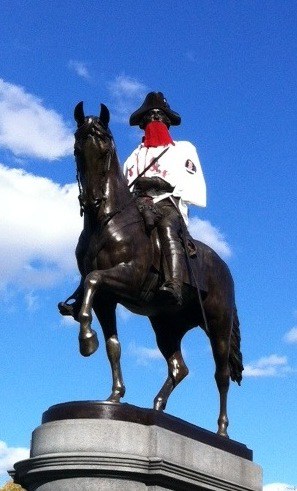 Would Cardinals slugger Carlos Beltran recover from his bruised ribs after crashing into the Fenway fence to catch the fly ball that cost the Sox a grand slam in Game 1? Would Red Sox slugger David Ortiz break the Cardinal pitchers’ lock on our offense and hit another one out of the park? Would any of us Sox fans recover from the obstruction call that threw Game 3 to the Cards?

My sister, who lives in St. Louis, is a die-hard Cardinals fan, so we’re enjoying a friendly rivalry of evening texts during each game. “I’m not talking to you right now,” she wrote after I texted how they got lucky with Beltran’s amazing save. I tried not to gloat when we won that first game, a good thing, because the next two games were heart-breakers for the Sox.

After we evened the series with Game 4, thanks to Jonny Gomes’s three-run homer and closer Koji Uehara’s picking off pinch-runner Kolten Wong at the bottom of the ninth with Beltran at the plate, she wrote, “Feel better?”

Yes, I did. This series gets settled at Fenway.

So, what does this have to do with living with scleroderma, you ask?

Well, let me tell you. First of all, watching a great World Series between two outstanding teams, one that’s your home team and the other that’s your sister’s, is a great way to forget about anything else that’s on your mind.

To wit, in the scleroderma department, my latest mishegas is yet another infected ulcer, this time in one of my toes, that necessitated starting antibiotics once again. Just as I was marveling how my toe was responding so well to the drug, returning to its normal color and shape, no longer waking me up at night with pain, a friend who is a geographer at Clark University shared her recent experience reviewing a National Science Foundation project in Baltimore (stay with me, this is relevant) that found conclusive evidence of antibiotic-resistant strains of bacteria in the Chesapeake Bay watershed.

This, in itself, is not news—ARBs, as they are called, were discovered this summer in the Hudson River, and have been found in water supplies around the world for at least a decade. The problem, as my friend explained, is that all the big pharmaceutical companies that have developed antibiotics, including Pfizer, one of the first large-scale manufacturers of penicillin, have discontinued their research and development of new antibiotics to treat the new resistant strains because it’s simply not profitable. This insidious public health problem, akin in potential impact to climate change, was discussed in a recent PBS Frontline program with infectious disease specialist Dr. Brad Spellberg. Scary news for one too prone to infections and anxiety.

No wonder dystopian movies are all the rage. Take me out to the ballgame. Please.

Second, watching the match-up between such worthy contenders is a lesson in mindfulness. Every time our guys are at bat or on the mound, I’m right there with them, totally focused on the other guy’s next move. Will it be a fast ball or a change up? A ball or a strike?

Each player has his little rituals for good luck, to manage tension—Gomes screws his hat onto his head before entering the batter’s box for the next pitch, Ellsbury adjusts and readjusts the strap on his batter’s gloves, Uehara takes a deep breath and peeks over the tip of his mitt before hurling another strike. I have to remind myself to take a deep breath, too. It’s only a game, right?

Finally, watching a great World Series is fun. The wily pitchers! The burly sluggers! We’re behind! We’re ahead! The bobbles! The beards!

All of us are more than just the sum of our health problems, our worries, our fears. The world can be a dangerous, frightening place. But for these few nights in late October, when the best Boys of Summer face off for a record-breaking, statistic-busting contest of will, strength, talent and strategy, I’m glad to be right there, cursing, cheering, hoping against hope for nothing more than the Sox batter’s ball to fly high and true, into the stands, into the glove of some grinning, bright-eyed kid who will remember this night for the rest of his life, believing that anything is possible.