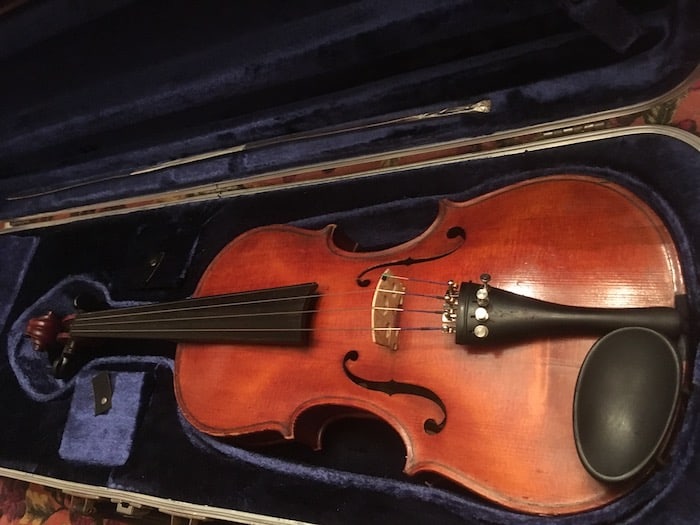 My grandfather’s violin is 108 years old. I learned to play it when I was in grammar school, and it has accompanied me everywhere I’ve lived for more than fifty years. This week, I am donating it to our public school system. Here’s why:

It was the summer between third and fourth grade when I first placed a violin under my chin. Our community was blessed with a robust summer music program. You could pick any instrument, borrowed from the school district, take lessons and play in a music ensemble. To the best of my knowledge, my parents only paid for private lessons. The rest was covered by local tax revenues. A long, long time ago.

I was among the shortest kids in my grade, and the violin I borrowed was a half-size. It was a hot summer, and I practiced those first scratchy notes in our unfinished basement, trying not to knock over my rickety collapsible music stand onto the concrete floor, playing for my father’s drill press, tool bench and table saw. Supposedly this was a way to stay cool, but I suspect my mother also didn’t want to listen to my novice efforts. It was creepy down there and not conducive to developing a love of the instrument, but I was an obedient kid and stuck with it. Plus, my older sister had already learned to play the flute, and I was not about to let her outdo me.

Persistence (and a dollop of sibling rivalry) paid off. By the time I had grown enough to manage a full-size violin, my father gave me his father’s instrument. Inside was a small, yellowed label that recorded its creation by one Samuelis Henricus Scheib in Nashville, Tennessee, on February 11, 1910. I played many pieces on that violin, auditions, solos, in chamber groups, All County Orchestra, and as first chair in our school orchestras as I got older.

For my sixth grade graduation, I played a solo accompanied by my teacher, Mr. Errante, on the piano, Meditation from Thaïs by Massenet. Near the end of the piece, there is a pause following a high harmonic, played pianissimo. The audience of parents, faculty and students broke into enthusiastic applause, and I can still see Mr. Errante beaming at me from his seat at the baby grand. I started laughing, but I managed to get through the final phrase, to a second rousing round of appreciation.

There were other memorable performances on my grandfather’s violin, including the first movement of Vivaldi’s Concerto for Two Violins and Strings in A Minor, played with my friend and orchestra seat-mate, Judy Parker, one summer with our student orchestra. I loved the bowing on that piece, a real workout.

Eventually, when I became concert mistress for our high school orchestra, Mr. Errante let me borrow the best violin that the school owned, and I set my grandfather’s violin aside. The tone was so far superior to what I had been able to produce on the family heirloom that I didn’t want to play it anymore. My senior year, I worked my way up to Mendelssohn’s Violin Concerto in E Minor. And that is as far as I got.

One of the reasons I chose the University of Rochester for undergraduate studies was my dream of taking violin lessons at the Eastman School of Music. But I never followed through. I played my grandfather’s violin in a chamber group on the River Campus a few times during my first semester, then set it aside. There were many complicated reasons why, including a romantic involvement with a guy who disdained the humanities as a waste of time—one of my great regrets. But I lacked self-confidence and was far too easily swayed by his strong opinions.

Even though I wasn’t playing it anymore, however, my grandfather’s violin travelled with me, a vestige of my former identity as a talented musician, a promise that I could always pick it up again. From Rochester to Pittsburgh to Springfield, Illinois, to Worcester, Massachusetts, it has moved with all the other trappings of my life and rested in its blue-velvet-lined case under my bed.

Over decades of neglect, the tuning pegs loosened, the bridge fell and the sound peg rolled around inside. When Al and I got engaged, he had it repaired as a gift. That was the last time I tried to play. Soon after, scleroderma claimed my fingers, and it was too late.

Still, I’ve held onto it, along with my favorite sheet music, for decades. It was just too hard to let it go—until Al recently made a decision to have his father’s viola, another family heirloom, repaired, for donation to the public schools through our local NPR affiliate. We’ve been listening to their PSAs for years, promoting the idea of giving unplayed instruments to the school system for students who can’t afford their own and want to learn. Nothing like a good role model.

Even still, I was hesitating to follow his lead, until one day about a week ago, when I woke up and looked at my post-surgery fingers and decided the time had come. We had it tuned with a set of student strings and the bow re-haired. When Al brought it home last week, I gently plucked the strings and held it under my chin one last time. Then I set it back in its case and said good-bye.

What’s the point of holding onto an instrument that makes no music? I have no more delusions that I will ever play the violin again. It’s time for my grandfather’s violin to find a new home. I hope it goes to a student who would otherwise never have had the chance to learn. And I hope whoever sets it beneath her chin will take good care of it, and pass it on when it’s time.