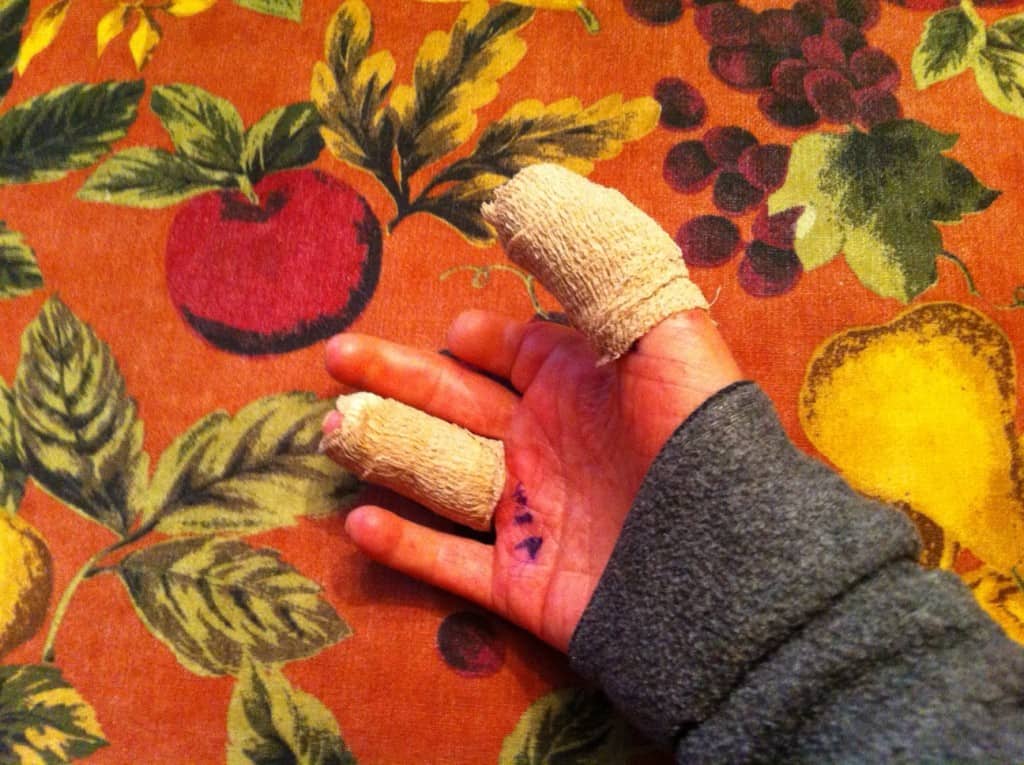 I am typing with three fingers on my right hand—middle, ring and pinky—and three on my left—ring, pinky and thumb. Usually, I use my right thumb as well. I actually had to stop and take attendance to figure this out just now, as I’m so used to compensating for digital ulcers that I automatically adjust how I type to which fingers are most healthy.

But my right thumb is out of commission for a few weeks, and my right ring finger, while occasionally useful at the moment, is also in need of a rest. Last Thursday, I finally had hand surgery to remove excess calcium deposits from both fingers that were interfering with my grip. Overall, I think it went well. I’ll know for certain next week, when I’ve healed more and the sutures are removed. I’m glad it’s over. I don’t want to repeat the experience any time soon.

The actual procedure went smoothly enough (despite our arriving nearly a half-hour late to the hospital’s ambulatory surgical suite, due to excessive rush hour traffic, which did not help my anxiety level that morning). Everyone was pleasant, informative and reassuring as they prepped me for surgery. I was glad to see my hand surgeon, who chatted with me as he marked my fingers with a purple felt tipped pen (“Yes” with an arrow pointing to the incision spot on each digit).

But there is a routine, auto-pilot aspect to the process that’s easy to succumb to (they must know what they’re doing, right?). Being assigned the role of patient—stripped down to a johnny and rubber grip socks, lying on a gurney, with your hair in a paper surgical cap and your glasses taken away—renders you more compliant. And vulnerable. In retrospect, I realize, from many years of dealing with the medical profession, regardless of setting or situation—I needed to be more assertive.

The IV nurse’s first attempt to insert a cannula in the back of my left hand was doomed to failure. I had warned her of my small, rolling veins—far too many experiences with IV antibiotics in past decades have rendered them hard to tap. But I didn’t think to stop her from trying, which I should have, because it really hurt and it didn’t work. Per normal, whenever I have blood drawn, the vein in the crook of my left arm was the right spot.

Next, the anesthesiologist came in to speak with me and asked me a bunch of questions about prior surgical experiences and my recent echocardiogram. But when I proceeded to give him a more detailed summary of the report, he dismissed me with the fact that he’d read it already (I certainly hope so, but then why ask the question?). At least he seemed to hear me when I said it takes me a very long time to metabolize anesthesia of any kind. “We’ll go on the lighter side,” he assured me.

The anesthesiology nurse was a bit more approachable and reassuring as he began the light sedative cocktail infusion that would help me relax during the procedure. As he pushed me into the OR, I was already starting to sink into a featherbed of valium. This was a good thing, and the addition of fentanyl made me quite comfortable (as comfortable as you can feel, under an extra layer of blankets because the OR is so cold—to keep the surgeons from overheating under all their gear, according to the anesthesiology nurse—when your head is being covered with a blue paper surgical drape and your hand that you can no longer see is being placed in some kind of protective sleeve and doused in chilly disinfectant). There was rock music playing—nothing I recognized, but good music, all the same.

Then came the local shots, which hurt like hell for far too many seconds—one in the fat pad beneath my thumb and the other, beneath my ring finger. The anesthesiology nurse was kind and comforting, standing by my left ear. Soon I felt nothing in my hand except odd pressure. One of the surgical team hummed to the music. I alternately closed my eyes and stared up at the surgical drape, which was perforated in the shape of tiny stars, as the team scraped out intractable globs of calcium, surrounded, my surgeon explained, by some abnormal cells that were essentially trying to encase the crud—like a tree closes off a wound. No wonder the stuff wouldn’t come out on its own.

Samples were sent off to pathology, and I was wheeled back to my berth. The whole procedure took about a half hour. Al was surprised to see me sitting up and drinking ginger ale when he was called back to my side. I was glad he was there.

I had hoped to see my surgeon again before leaving, but he was busy with other patients. His resident came by, instead. And here is where, once again, I found myself struggling to get my points across. I am allergic to oxycodone (Percoset). If I need a heavier pain killer, I take hydrocodone, the active ingredient in Vicodin. I thought I had some at home from a prior surgery, but didn’t recall. But he would not write the prescription. It wasn’t in their protocol. I don’t know if this is a reaction to the tighter restrictions on opiodes, but it made no sense. He wouldn’t budge.

In addition, I asked for a prescription of my most effective antibiotic. I had discussed this with my surgeon, who agreed it would be a “good idea” to start it when I got home as a preventive measure, given my propensity for infections. I had some left over from a previous infection, but not a full bottle. The resident informed me that research has shown antibiotics as a prophylactic neither help nor hurt, so he wouldn’t write the scrip.

“If it makes you sleep better at night, you can take what you have,” he said. In essence, he was telling me I was taking a placebo. I was really frustrated, but I was also exhausted and just wanted to go home. So I didn’t insist on seeing my surgeon and dropped it, knowing I could call my other docs and take care of it. The resident confidently told me that I would have minimal discomfort from the procedure and left.

As it turned out, it was a good thing I had some Vicodin that had not expired on hand. It took 18 hours for the local anesthesia to work its way out of my body—I could not assess the pain level before I went to bed that night, except for a glimmer of a warning of a problem in my thumb. I started the antibiotics and took one Vicodin before going to sleep.

By 5:00 a.m., I awoke with significant pain in my thumb. On a scale of 1 to 10, it was a 7. A second Vicodin didn’t really make much difference, because the pain train had already left the station. It took the entire day of alternating Tylenol and Ibuprofin, plus distracting myself, to get it fully under control without making myself too queasy from more Vicodin, even as the initial doses were essential to the whole mix. Al stayed home with me again, taking another day off from work, because I was so uncomfortable from the pain and woozy that I was afraid of falling. I missed the follow-up call from the hospital and decided not to return it. What were they going to tell me that I didn’t already know, better?

By Saturday, I was up and about, and a couple of days later, I’m back to almost normal, just managing the wounds. In a few weeks, I hope my right hand will be more functional. I’ve written this long entry, which is good progress.

But my experience reminds me that I have to be assertive, whatever medical setting I find myself in. There are times to listen and learn, and times to speak up and educate. Scleroderma does not fit neatly into a protocol. I am an outlier on the bell curve. The sooner those who seek to attend to my medical needs understand this, the better we’ll all be.