When I was maybe three years old, I had a penchant for caterpillars. I loved to let them crawl all over my hands (even though they caused my skin to peel) and would fill mayonnaise jars with sticks and grass, load them with my insect friends and, with my mom’s help, punch holes in the top so they could breathe. Within a day or two, they always died. So much for the budding entomologist. 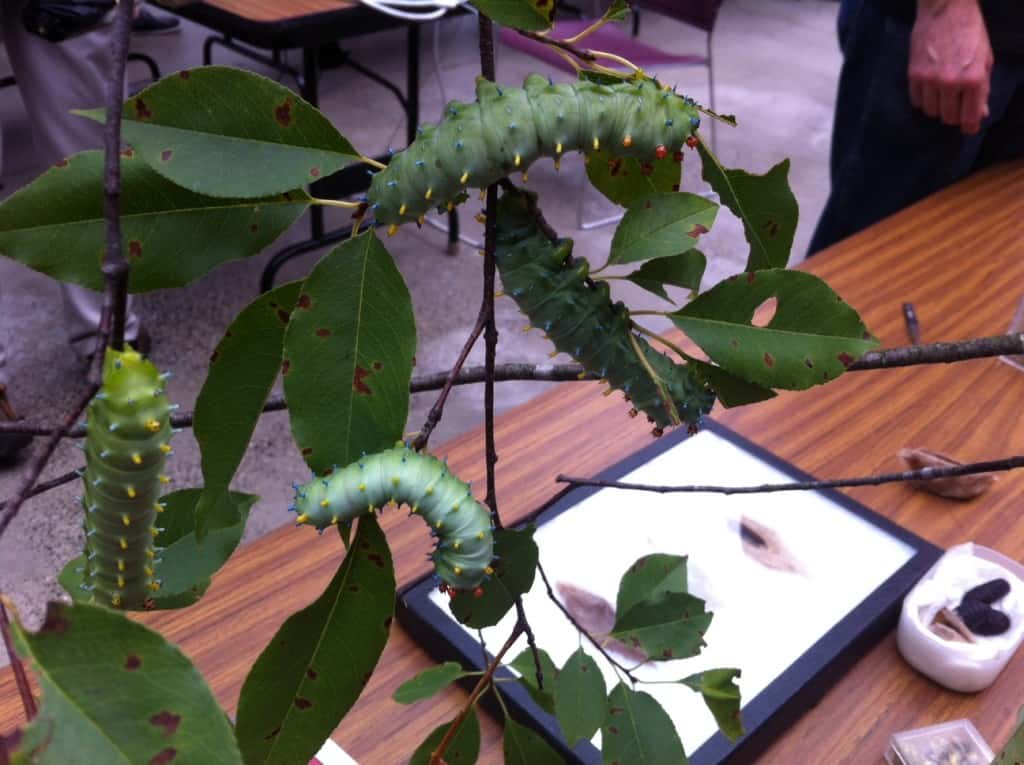 But my old fascination with the insect world was rekindled this past Sunday, when Em and I went to a botanical garden to see a display of live caterpillars. These were astonishing creatures, some as tiny and well camouflaged as a slender twig, others as thick as my fingers, bedecked in jewel tones. They crawled over docents’ outstretched hands or munched methodically on their favorite leaves. Said one visitor, “I feel like I’m watching someone eating corn on the cob.”

I went home marveling at the beauty of some of Nature’s humblest creations—until later that night, when I was getting ready for bed and noticed an odd series of red spots on my shins. The night before, I’d found a set of four on my right leg. This time, I saw a series of spots on the left. They didn’t itch. But they looked eerily like the connect-the-dots, after-dinner trail of a far more menacing insect—a bedbug.

Worried, given all the traveling we’ve done of late, I forced up the corner of our mattress to check the box spring. There, in a crevice, were two shed exoskeletons of some kind of small bug. I ran and got a piece of tape to extract them and tried to examine them under a magnifying glass. Even with that assist and bifocals, I’m just too farsighted to be able to see clearly. But I was convinced it was proof that I had brought bedbugs home with me from Chicago a few weeks ago.

Al could not dissuade me from my conclusion. He gave me a hug and went to sleep in our bed, and I went downstairs to try to sleep on the couch, too uneasy about getting more bites. I then proceeded to spend half the night agonizing. I looked up heat treatments for bedbugs and fretted over how we could cover the four-figure expense. I did Internet searches for the best contractors. I found way too much information about all the work you have to do to prepare for bedbug extermination. Finally, around four in the morning, I had worn myself down enough to fall asleep. I woke up at six, as Al prepared to go to work.

The A-rated local pest control company didn’t open until eight. At three minutes past, I called and described the situation. They asked me to text an image of what I found. I did my best to take a picture with my iPad, but with my clumsy, tired hands, could not focus it crisply enough for them to be able to ID the bug. So I got dressed and drove my taped sample over to their office.

After a few false starts with an uncooperative computer, their bug ID specialist successfully booted up and got a close look under her electronic maginifier. Lo and behold—it was not a bedbug, after all, but the shed larval “exuvia” of a carpet beetle. Ironically, their larvae resemble tiny caterpillars. In fact, they have hairlike protrusions that have earned them the nickname of “wooly bears”—not, however, to be confused with the same insect as those cute, fuzzy, brown-and-orange caterpillars that are supposed to predict the length of winter.

We don’t have carpeting. But carpet beetles aren’t all that particular. A common household pest, they don’t bite. They just munch on organic matter other than people. Much like all those caterpillars chomping away at leaves like corn on the cob. This larva may have shed its outer skin years ago, for all we know. If we had an infestation, the bug ID specialist told me, we’d know, because they’d be all over the place.

I was greatly relieved. And exhausted. I concluded that this whole episode was a major kick in the pants for us to finally declutter our bedroom and the rest of the house, and deprive any lingering carpet beetles of their smorgasbord of stray fiber delicacies.

As for those spots on my leg, I have no clue what they are. If they get worse, I’ll have to see a dermatologist and get some answers. For now, they don’t itch, which is a good thing. One more chapter in the book of strange skin changes. Whatever the cause, if I ever find out, I’m just grateful I can sleep in my bed, again.