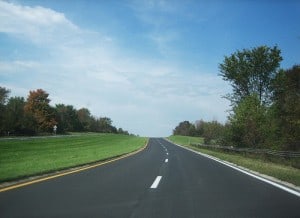 I’m singing with Jim Morrison’s husky baritone, cruising west on the Mass Pike. It’s Sunday of Memorial Day weekend, drizzling, then raining, then sunny with patches of azure flashing behind wooly clouds, then pouring again, as I head toward the Hudson Valley to help Emily move home from college for a couple of weeks before she leaves for her summer internship.

Driving long distance is a meditation for me. As long as traffic isn’t onerous, I can focus on the present moment of the road before me while allowing the back of my mind to wander. Often, the answer to a problem I’m trying to solve will pop out of nowhere. During the dozen years that I used to commute 100 miles round-trip to Boston daily, I would do some of my best thinking during rush hour traffic jams.

But today, I’m just enjoying the classic rock road trip medley playing on my satellite radio and trying to keep my joints from locking up. I didn’t sleep well the night before, so singing words to old favorites is the best way to stay alert, and bopping to the beat helps me shift my weight so my back and hips don’t get sore.

Wings will never rival the Beatles, but I still like McCartney. Most of the traffic, heavier than usual for a Sunday, drifts off the Pike at the exit to Interstate 84, heading, no doubt, for New York City and environs. Not yet few enough cars and trucks to set the cruise control, but easier from this point west.

Now that I don’t have to drive daily into Boston, I enjoy the road more. But commuting forced me to be a better driver. I had always been intimidated by heavy highway traffic, especially in and around a major cities, until about 17 years ago, when I agreed to participate in a study for new medication to treat Raynaud’s at Boston Medical Center. I had to drive into Boston once a month for a check-up as part of the study and realized the commute was not only doable, but I reveled in the sense of independence it gave me and the discovery that the city was more accessible than I’d thought. That led to the decision to seek a better-paying salary in Boston and twelve-and-a-half years as a marketing director in higher education. I had some hairy trips in bad traffic and nasty weather, but I never had an accident.

Working for myself now, I don’t miss the commute one bit. But on a day like today, I enjoy the feel of the road, the lush green landscape, the ever-changing sky. I just wish I weren’t quite as tired. Time to make a rest stop and stretch my legs.

Thank you, Eric Clapton. Thank you Duane Allman. Thank you, Derek and the Dominos. No better song for driving, ever. More sun than rain, now, as I cross the New York border and head down the Taconic State Parkway.

I grew up farther south, along the Hudson, and there is something about the rolling landscape, the view of majestic blue Adirondacks on the horizon, the Dutch and Indian names for creeks and towns that feels comforting, familiar. I set my cruise control close to the 55 mph speed limit, sit back and glide up and down the hills. The Taconic is notorious for speed traps and deer. I will be glad to get out of the car soon.

Belting it out with Chicago, I finally reach the quaint Hudson River town near Emily’s college. Just a few more miles to go. The sun is out, it’s cool and windy. Rainbow pinwheels spin in a bakery’s front yard. The farm stand near the college is open for the season. I have figured out the structure for this week’s blog post.

I park behind the row of dorms near a few other parents, their cars crammed with luggage and boxes. Em arrives, smiling, with her bike and a few other items that we need to fit into my Prius. She’s already packed everything else into her sister’s Elantra that she’s borrowed for the year while Mindi is living in Tel Aviv.

The wind feels refreshing, now. It’s so good to stretch. We visit with a friend, drop off Em’s keys to the dorm that she’s overseen as a peer counselor (otherwise known as an RA) for the year, and go out for a late lunch at the local diner. The fish burger, sweet potato fries and tea revive my brain, a good thing. We have a three hour drive home, with me in the lead.

As we cross the Massachusetts border, the bottom arc of a huge rainbow bends from massive, scudding clouds to the Berkshires, below. I call Em, following several car lengths behind, on my cell. “Welcome back,” I say. “That rainbow is just for you.”