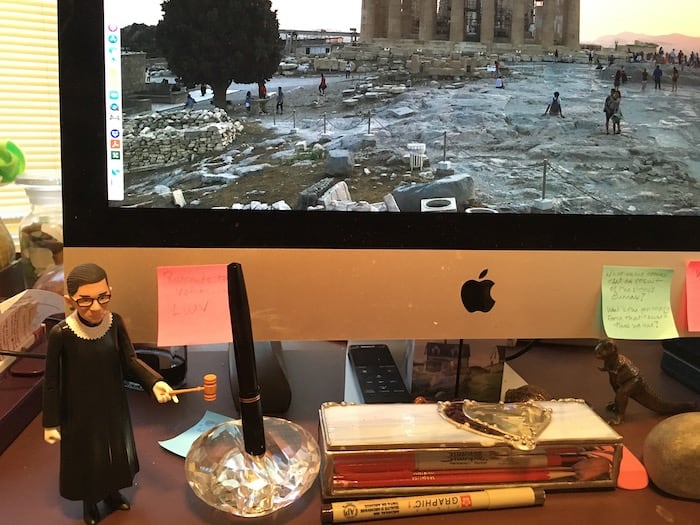 On my desk, I have a figurine of Ruth Bader Ginsburg, a gift from my younger daughter. She is dressed in her black robe and trademark lace collar, and she holds a gavel in her hand. Her face is stern, owlish, with large glasses, her hair pulled back tightly against her scalp. She is not quite five inches tall.

The real Justice Ginsburg was barely five feet tall. But what a legal giant in that slight frame. We owe her such a huge debt for so many legal rights that we could easily take for granted—particularly for all of her fierce advocacy as an attorney and for her landmark opinions as a Supreme Court Justice that established the legal precedent that the 14th Amendment’s equal protection clause outlaws discrimination based on sex.

She was also a consensus builder, and her deep friendship with Justice Antonin Scalia, whose legal opinions were often at the opposite end of the ideological spectrum, is legendary.

I learned of her passing on Friday just as we were sitting down to dinner for the first night of Rosh Hashanah, the Jewish New Year. I was stunned, heart-sickened. Then I stopped to think how this extraordinary woman, who had fought and beaten cancer multiple times, was finally at peace.

Would that be so for our country. Now the fate of the Affordable Care Act, with its protections for people with pre-existing conditions like scleroderma and so many other devastating diseases, hangs in the balance, with a challenge to the law’s constitutionality scheduled to be heard by the Supreme Court the week after the November election.

Legal observers had predicted that the court would decide to uphold the ACA, as it has in past challenges, by a 5-4 opinion. But with Justice Ginsburg’s death, the court could render a 4-4 tie, sending the case back to the 5th Circuit Court’s ruling that the law is unconstitutional. Or, if the Republican Senate succeeds in its bid to replace Justice Ginsburg with a conservative justice even before the election, the court could overturn the law. The result for 20 million Americans who buy their health insurance through the ACA marketplaces, or who have gained Medicaid through the law’s expansion in recent years, will be chaos.

I’m saying a lot of prayers these days for our country, that our democracy hold strong against the forces of division, that Americans’ basic common sense and fair mindedness holds sway, that our better angels prevail. I think of Justice Ginsburg and hope I can summon the courage and determination she demonstrated through her long and illustrious career to do my part. There is too much at stake to take anything we hold dear for granted.