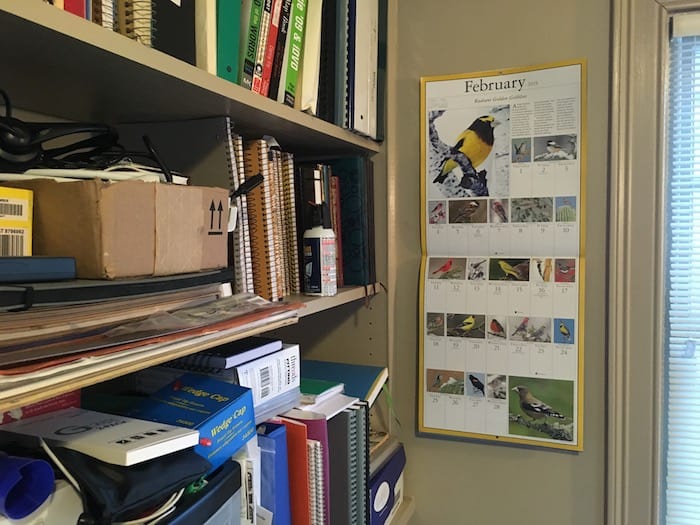 The other day I received a gift of an Audubon wall calendar, beautiful photos of birds, one for each day of the month. It’s big and long, and I found just the right spot in my office. But then I hesitated. Could I hang it myself?

This seems a trivial question. Of course, I could ask Al to do it for me. I haven’t wielded a hammer for months, maybe a year, even. Not that I don’t know how. It’s just that my hands were too damaged for so long, that the idea wouldn’t have even crossed my mind. But now that my hands have healed from all the surgery, could I still manipulate a hammer and a nail without hurting myself?

Years ago, when my father moved from our family home into independent living and, later, assisted living, I rehung his art collection. If memory serves correctly, there were 76 paintings, photos, etchings, block prints, drawings and more, all part of what  had once been my grandfather’s art. There were many beautiful pieces, and I wanted Dad to be surrounded by it all, so that he could still feel at home in his new, downsized setting.

It was a big undertaking, but I followed the method he had once taught me:

Sounds complicated, but it’s very straightforward in practice and works like a charm. When I finished, his apartment looked like he was living in an art gallery.

The first time I set Dad up, for independent living in 2000, my fingers were still nimble enough to manipulate the nail and tack hammer without too much difficulty. By the second time I moved him, to assisted living a few years later, I had to make some adaptations for my hands. In order to hold the nail and picture hook in place, I had to place a piece of tape around them, tap gently with the hammer, then when the nail was partway in, I could remove the tape and finish the job.

Fast forward to Sunday afternoon, when I was contemplating the much simpler task of tapping one tack nail into the wall for my new calendar. My left index finger is now fused. So I couldn’t in any way risk banging it with a hammer. Fortunately, it fused into a position that enables me to still touch the tip of my thumb. Holding a nail was still possible, but I knew I needed to be very careful.

Unfortunately, our tack hammer disappeared somewhere over the past few years. All we have are two regular hammers, quite heavy in my right hand. When I picked one up, I wondered if I was making a mistake. But I had to try.

So, I marked the point where I needed to put the nail in the wall with pencil (just a dot through the top hole of the calendar). I had to manipulate the nail a few times to be sure that (a) I had a firm grasp and (b) enough of the head was above my fingertips so I wouldn’t hit myself. I choked up on the hammer’s handle so I wouldn’t have so much weight to swing. It took a few taps and moving the nail a couple of times, but . . . it worked!

The calendar now graces the side of one window in my office. It’s pretty and cheerful. Most of all, it’s a reminder that my hands are still capable of more than I think, more often than not.