Hide Search
You are here: Home / Mind / Smelling in the Present Moment

Our golden retriever, Ginger, may be going on 14, but her sense of smell is still in tact. Whenever we go for a walk, she leads with her snout close to the ground, sniffing every leaf and lamppost, inhaling dank secrets.

Which has me musing: How fascinating that we take in smells with every noseful of air. If we breathe through our mouths, we simply breathe. But through our noses, we get more than just essential oxygen—we get a world of sensation that resonates deep in our psyches. Smell, as any writer knows, is the strongest way to evoke memory. For a dog, olfactory memory is all the more powerful, I suppose. 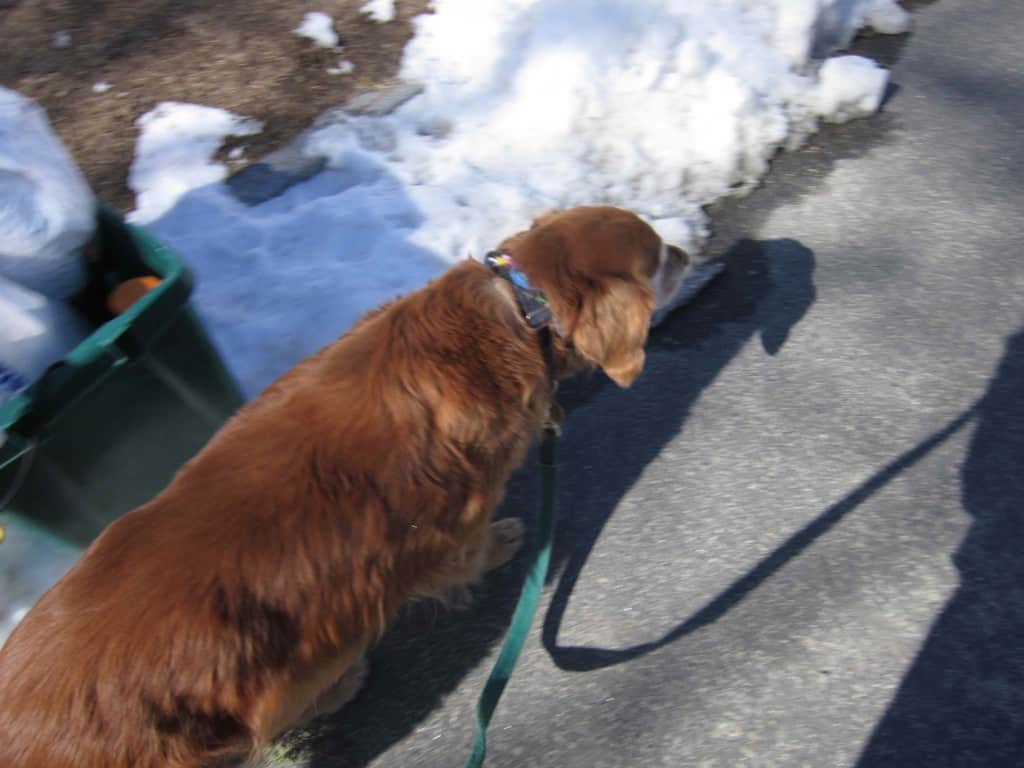 And musing: How it is that our aging Ginger, who is nearly a centenarian in dog years, can still smell a whole lot better than I can? She has, of course, the canine advantage. But I’m also gradually losing my sense of smell.

Some of this is due to genetics. Both my parents began to lose olfactory acuity as they aged. This almost caused a calamity once, when my dad decided to cook sorbet from scratch and left the pan of boiling sugar on the stove unattended. The pan caught fire, igniting the cabinet above the stove. Fortunately, my parents called the fire department in time and their house didn’t go up in flames.

But some of the problem is due to scleroderma, as well. My nose has narrowed and tightened. In addition, Sjögren’s has significantly dried up my nasal passages. I irrigate my nose and sinuses twice daily with a saline solution, which helps my breathing and limits nosebleeds, a real problem in winter. But I still can’t smell as well as I once could.

Very frustrating. I used to have a really acute sense of smell—to the point that I would tell Al about some odd odor and he’d look at me as if I were crazy. This skill saved us some major kitchen disasters of our own. Years ago, in our first home, I began to notice a sour smell. After some investigation, we discovered that either mice or chipmunks had been storing dog food kibbles in the grid behind our refrigerator. Condensation had leaked over the kibbles, which began to mold. Not pleasant.

A few years ago, a plastic surgeon told me he could widen my nostrils to their original dimensions and “take a little off the top” of my rather prominent Herwitz nose to make it easier to breathe. I gave this some serious thought for a while. But so far, I’ve decided not to go the extreme makeover route. My nose may be big and narrow, but it’s mine, and I’m pretty attached to it.

Just recently, I’ve discovered another, much simpler strategy that appears to improve both my breathing and ability to smell—meditating. If I can settle into that quiet, still, contemplative place in my mind (not easy, but I’m working on it), slow down my breathing and just be present, my nasal passages widen, I can breathe deeper and smell more of the world around me again.

Ginger seems to know this, intuitively. Like all dogs, she lives in the present moment all the time. For me, walking her is a form of meditation itself (provided no other dog passes us in the opposite direction). So, I need to take my cue from her: Slow down, pay attention and smell the roses—or whatever else may line my path.