Hide Search
You are here: Home / Body / The Big Bang

Last Tuesday night, I was backing out of our driveway, minding my own business and listening to music, when, WHAM, I hit something. Now I’m a careful driver, and I had checked both directions before moving. It was really dark out. I was not happy. 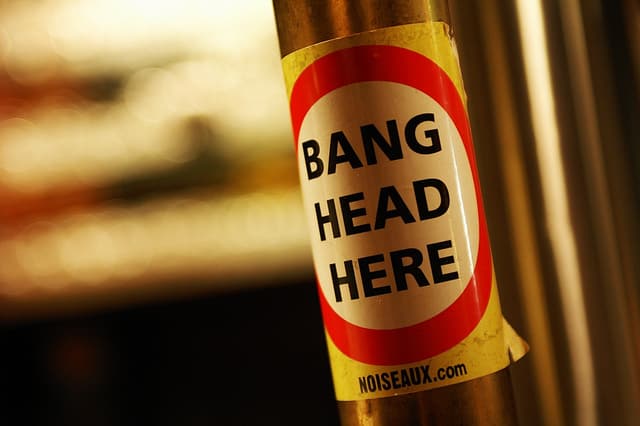 I pulled over to the side of the road to see what happened. Not only had I hit something—I had hit Al’s Honda Civic. He’d parked on the street, because our eldest was home visiting and her car was in his normal spot to the side of the driveway, but I didn’t see his car when I backed out.

Not only had I hit Al’s car, but I’d dented the passenger door on the driver’s side. Thirty seconds at five miles an hour. Hundreds of dollars of damage. I hurried back into the house to tell him.

To Al’s great credit, he didn’t get upset or angry. He gave me a hug. We went outside to look at the door. It still opened and closed properly. He told me not to worry and to go on to my weaving class. For the next hour-and-a-half, as I wove, all I could think of was that I was determined to make the repairs, regardless of the cost.

Then I got home and took a closer look at my Prius. Not only had I dented Al’s car door, but I had cracked my rear bumper. It’s fiberglass, one piece. More dollars flying out the window. How is it possible to be driving so slowly and do so much damage to two cars?

The day after New Year’s, Al took the cars to a trusted autobody shop and got the estimates. Well, it wasn’t as bad as I expected, but it was bad enough—$750 to repair both. Oh, boy. We decided to go ahead, because I wanted to fix what I’d messed up.

So, for the next couple of weeks, we’ll have one or the other car in the shop. We’ll find the money somehow, the cars will look as if nothing had ever happened, and I will most certainly try not to make that expensive mistake again.

With a few more days’ hindsight, here are my bigger takeaways:

The older I get, the more closely I have to pay attention when driving at night.

I’m very lucky to have such a good husband who doesn’t get mad when I bang up his car.

We’re fortunate to be able to repair both cars, even if it will take a few more months to pay off the credit card.

They’re just cars. They aren’t people. No one was hurt.

Now, if only I could find a body shop that would make me good as new for $750—that would be something.