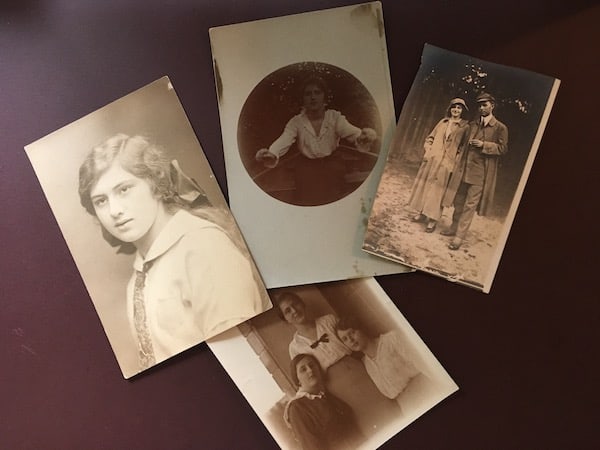 It was just two weeks ago, on Monday, that I flew home from Florida after meeting my cousin and her parents for the first time. But it already seems much longer. That’s one of the strange aspects of time and distance: You can go away and feel completely immersed in a new place, with new people, and then return home, where it feels like all that was a dream.

But it most certainly was real. Last fall, out of the blue, I received a message from my second cousin. Her mother, who is now 95, was my mother’s first cousin; her grandmother was my grandfather’s younger sister. Our mothers grew up together in Berlin, but went separate ways when my mother and grandparents immigrated to America in 1936. My cousin’s side of the family moved to Bulgaria and waited out the Second World War until 1948, when my grandfather sponsored them to come to the U.S. Like me, my cousin was born in the States. Her family settled in the Midwest, and mine eventually made a home on the East Coast.

I knew of her, and she knew of me, but for reasons that neither of us could figure out (“Why have we never met?” was one of the weekend’s refrains), our mothers never saw fit to get together as adults. They did, however, maintain a robust email correspondence in their seventies, which ended with my mother’s death in 1999.

Fast forward to the recent past, when my cousin moved her parents (her dad is 94) from their Indiana home to Florida, so that she could care for them close by. In the process, she discovered a treasure trove of family pictures and other memorabilia. And, fortunately for me, she couldn’t bear to toss any of it. She wondered if I or my sister might want some of the photos, poems written for special occasions, wedding invitations, death notices, steamship manifests, greeting cards, thank you notes, and more. A determined researcher, she found me and took a chance on making a call.

Since that initial contact, we’ve been emailing back and forth. I asked if I could meet her and her parents, and received an enthusiastic yes. So, I went. We hit it off immediately and stayed up late each night talking about family and all that we have in common. Her husband was out of town, and two grown sons off on their own, so we had the house to ourselves. It was wonderful to spend time with her parents, too; we had great conversations about family history and even spoke a little German. And my cousin and I got to the beach.

So many photos, so many memories, so many stories. There were pictures of my grandfather’s youngest sister, who died when she was 26, before the War. I had always heard of her, but never known what she looked like. There were pictures of my grandparents as a young couple, and of my grandmother as a girl with a huge bow in her hair. There was a poem that my mother, then an infant, supposedly wrote on the occasion of a family wedding. There was a picture of my grandmother tending my mother as a baby. There was a family tree with information my cousin had gleaned as a high school student from her grandmother, which filled in some missing puzzle pieces.

There were also many photos of people I did not recognize. My cousin still hopes to find out their identity. She feels a pull to honor their memory. And harbors a deep wish not to end up as a nameless person in an image, whom no-one recognizes. It was a poignant observation, all the more relevant in this digital age, when it’s so easy to point and shoot and amass thousands of images in the cloud, to live forever as bits of anonymous data.

It is strange how sepia-toned photographs call to us across time and distance. I stare at these images of my German relatives and wonder—what were they thinking when those photos were taken? What did they know of the coming storm that would force them to make the most difficult choice imaginable, of leaving home to escape such horrific danger? They look so innocent, so content in their familiar world.

And I wonder: how would our lives have been different if my cousin and her family had known mine, growing up? I’ve always wondered what it would be like to have a cousin. Both my parents were only children, and our extended family was very small. At least, now, thanks to my cousin, I can find out.