Hide Search
You are here: Home / Body / Into White

This is quickly turning into a record-breaking winter here in Massachusetts. On Monday, Ground Hog Day, we got another foot-plus of snow on top of our record nearly three feet from last week. And it looks like there’s more to come. 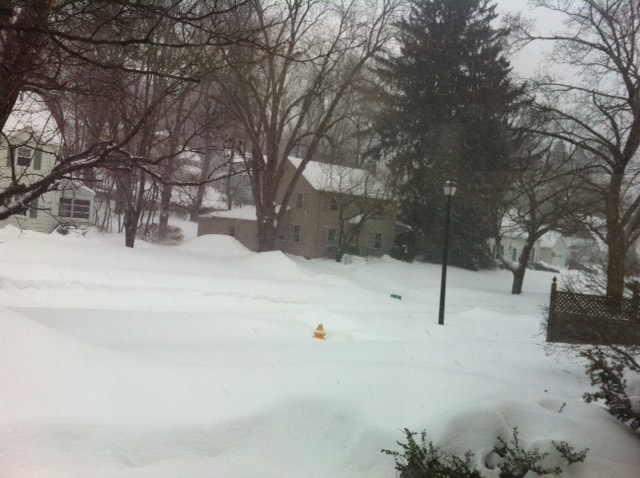 I feel like I’m stuck in an endless loop of snow storms.

It wouldn’t be so bad if I didn’t feel so confined by the mounds of white stuff. I can’t shovel, and I can’t use a snow blower, even if we had one. I simply can’t stay out in the cold that long, and the temperatures are sinking into the single digits, with sub-zero wind-chill.

The (thankfully) warm but dry air in our home is wreaking havoc on my digital ulcers—up to eight on as many fingers. I’ve been on antibiotics for more than two weeks, now, as two messy ulcers slowly clear. Last week, I ordered a shipment of 1500 bandages (that’s 15 boxes of 100 each), but I’m now wondering if they will arrive before I finish my last box, given all the snow and inevitable delays.

All of this prompted me to do some research about long-term weather forecasts. Not that it will make any difference.

It doesn’t look good for February.

According to meteorologists who follow world-wide weather patterns, at least two factors on the other side of the globe are controlling our snow fall and temperatures here in New England:

There’s a lot more to it than that, but I won’t even attempt to summarize, especially if you don’t share my weather geekiness. Basically, it all comes down to physics, and the fact that our lives and circumstances are much more intertwined around this planet than we realize.

Bottom line: Our average annual snowfall here in Central Massachusetts is 64 inches. We’re now up to 57 inches, just in the past 10 days. And we’re supposed to get more snow on Thursday and again on Sunday to Monday.

A part of me wants to scream and head someplace sunny and mild (assuming I could actually get a flight despite all the snow). But this is New England, and we’re supposed to be hardy. So I will do my best. I will take necessary safety precautions and try to enjoy the journey into white. And I will continue to remind myself that—long range forecasts notwithstanding—the most important lesson from a winter like this is that control is an illusion. The only thing we can manage is the moment we’re living in, one snowflake at a time.