I tried an experiment last week. I had to go to New York City on business overnight. There is no easy, direct public transit from Central Massachusetts. So, because I was in Boston during the day on Wednesday, I took Amtrak to Manhattan, and planned to take a bus back home the following evening. The bus was scheduled to make three stops in Connecticut along the way, including a transfer in Hartford. 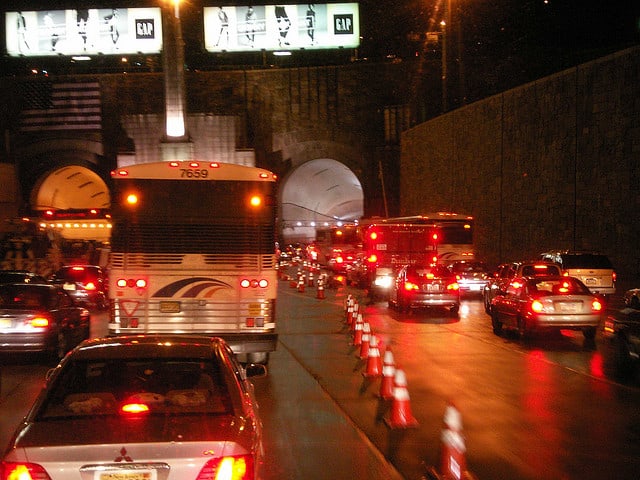 I’m not crazy about long bus trips, but the plan saved me from having to drive home late at night, either from Boston in the east or from Springfield in the west, if I had gone Amtrak all the way.

I thought I was being very organized. I had all my tickets printed out, in addition to the email versions on my phone. For some reason, the bus tickets (one for each leg of the trip home) printed out back to back, which rarely happens on my printer. So I assumed it was intentional to save paper.

Wrong. After a full day’s meeting on Thursday, I made my way to the Port Authority Bus Terminal in Midtown and found my gate. Then I noticed, to my dismay, that everyone else in line had two tickets—one to Hartford, and one to their connection.

When it was my turn to present my ticket and photo ID to our driver, I explained my dilemma and asked if I could just show him the ticket and keep it for my transfer. No, he informed me, he had to take it. They don’t accept electronic versions. Only paper. I needed to reprint my ticket when I got to Hartford.

Now, we had 15 minutes in the schedule to transfer busses. I knew the Hartford bus station was small. But I was nervous. And frustrated. If only I’d thought to make a second copy, just in case. After everyone was on the bus and our driver was finishing his paperwork, I asked him again if there was any chance I could show the PDF on my phone to the other driver. No, he reiterated, but he was sure I’d have enough time to take care of it in Hartford.

Nothing I could do but wait the three hours until we got there. We pulled out of the below-ground gate and up into traffic. Lots of it. Our driver welcomed us on the bus and introduced himself as Caesar. If it was too hot or too cold, he said, let him know. No loud phone conversations or music. No photos. I watched a flock of pigeons battling over something on a sidewalk and told myself there was no use getting upset. I just needed to sit back and see what happened.

By the time we got to New Haven, our first stop, we were already 20 minutes late. I was trying my best not to freak out. I called Al and gave him a head’s up—if I couldn’t make my connection, I needed him to drive over an hour to pick me up. Fortunately, he was his good-natured self about this delightful prospect, which at least eased the pressure.

For reasons unknown, on the way to our next stop, New Britain, we got off the highway and onto a series of side roads and byways lined with strip malls, then back on the highway. That put us behind by 25 minutes. I had no idea where we were, so I followed our route on my phone app, just to reassure myself we weren’t lost.

Finally, we pulled into Hartford, a full half-hour behind. I had traded seats with my seat-mate to be on the aisle and able to get off sooner. Caesar told us the gate number for our connection. By a miracle—or, rather, the inefficiency of bus travel—that bus was late, too, and had not yet arrived. So I grabbed my bag and ran to the ticket counter.

The ticket agent was, of course, helping someone else. And. Taking. A. Long. Time. I asked if I could just reprint my ticket, and she told me to wait my turn. Then she announced that her computer was not allowing her to print the other customer’s ticket. Meanwhile, the connecting bus had arrived.

I was at a loss for what to do. Fortunately, Caesar had come to the ticket counter. I’m not sure if he would have checked in anyway, or if he was following up on me. But given that we’d arrived late and he was due in Springfield, he could have just left. Instead, he walked with me back to our bus, pulled out his envelope of tickets, found mine, walked me back to the ticket counter and asked the agent to make me a copy. Of course, the copier was off and needed to charge. Did I mention this is not a 21st century operation? But within a couple more long minutes, it fired up and I had my copy. I thanked Caesar profusely and ran to the connecting gate.

I was the last person on the bus. We sat for another 10 minutes, for reasons unknown, and then departed. I called Al to let him know I’d made it.

“I guaranteed you would,” he said.

“I just looked up the directions to Hartford.”

We laughed. Thank goodness. In the end, I made it to our own Union Station just 15 minutes later than I should have and was very glad, indeed, to see Al waiting for me with an open car door.

My knees were shot from the bus ride, with its cramped seating and worn out shock absorbers. And my nerves were a bit frayed. I was really tired. But if it weren’t for our driver, who took the extra few minutes to make sure I was able to make my connection—despite the fact that I was the only one on his bus who did not know the rules of the archaic ticketing system—it would have been a much longer ordeal. Maybe he took pity on me. Or maybe he thought it was ridiculous, too.