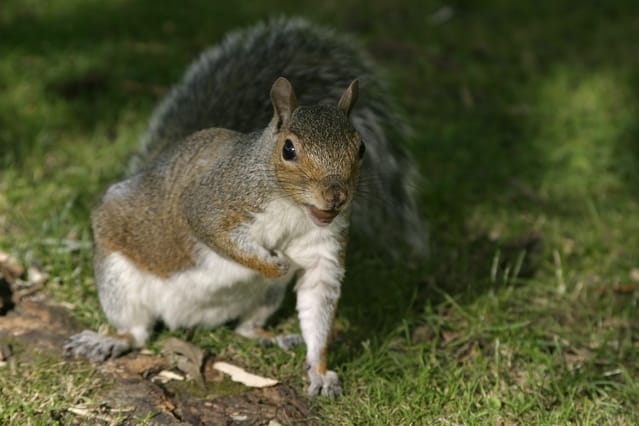 In our back yard, a supposedly squirrel-proof bird feeder hangs on the trunk of a Norway maple. For the past year-and-a-half, it has confounded the squirrels. They’ve climbed all around it, certain it contains something good to eat. All that spilled seed near the tree’s roots must mean those birds are onto something, right? There just has to be a way to get some, too!

Then, last week, one wily squirrel finally cracked the code. Hanging down over the roof of the feeder, it managed to push down on the spring-loaded perch, swing around, climb up and sit on the ledge of the seed tray. There it curled its bushy gray tail into a question mark—You gotta problem with that?—and gobbled up black sunflower seeds.

I stepped outside to shoo it away, but in a short while, the squirrel was trying once again to remember the combination of acrobatic moves that had been so rewarding. No luck, at first. Next morning, I looked out the window and discovered it happily munching away again at the feeder.

At first, I was annoyed. But I was also impressed. That was one smart squirrel! Clearly, it was capable of learning from trial and error to get the reward—just like a lab rat learning how to push the right levers to get sugar water.

Since then, however, I haven’t noticed the wily squirrel at the feeder (which doesn’t mean it hasn’t been there). Birds continue to visit, so at least I know there’s still plenty of seed left.

Meanwhile, I’ve been learning some new tricks of my own, out of necessity, since my hand surgery a couple of weeks ago.

For years, I’ve been cutting bandages in half, the long way, for dressing my digital ulcers. I lap and contour them over my finger tips, then secure them in place with a full bandage wrapped around the finger. And I’ve always used a pair of cuticle scissors to cut the bandages. They’re small and sharp and light to handle.

But with my right hand out of commission for well over a week, I needed to recruit some help. My left hand just isn’t as coordinated, and I couldn’t cut the bandages. So I asked Al to do it for me. Another time, when he was at work, I asked Emily, who is home for the summer, for assistance.

Both followed my instructions—but both also inspired shortcuts that I had never considered. Al devised an easier way to cut the bandages—just shy of the peel-open end—so you can peel the wrapper and release both halves at the same time, instead of having to peel each half bandage separately.

Both Al and Em asked me why I insisted on using the cuticle scissors. I had to admit, they don’t cut a straight line very easily and can get stuck in the adhesive. Also, I realized, the reason I can’t use them right now is the holes in the handle are too small and press against my thumb sutures. So I fished out a spare pare of rubber-handled kitchen sheers from the junk drawer and tried them out. Voila! Easy, painless and quick way to cut my bandages in a snap, even with my healing right hand.

Which brings me back to the wily squirrel.

It’s so easy to get stuck in one way of doing things, even when the approach really is not working all that well. You can keep on looking at a problem the same way, circle round and round, trudge along. Or you can stand on your head and open your mind to a new perspective. Even if you’re not an acrobat—or a squirrel—the view is worth the effort.